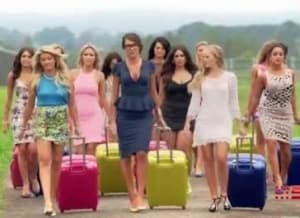 When Love Comes to Town's contestants

House Rules ruled the night for Seven last night, now that Nine's The Voice is down to two nights a week.

The home reno program won 1.312 viewers across Australia's five metro areas, helping Seven to a 32.1% free-to-air audience share and claiming the top spot for a second night in a row.

The Voice is now on air on Sunday and Monday nights while the 'Battle' and 'Showdown' stages are aired. A Nine spokeman told AdNews the final stages of the singing contest – the live shows – will then take the reality program down to one night a week.

Meanwhile, without the benefit of airing immediately after The Voice, Nine's When Love Comes to Town plummeted on its debut in the same slot last week, winning 636,000 viewers compared to its premier to 868,000. That meant it finished in 19th place.

Seven's new expose on Bali – What Really Happens in Bali – drew a big crowd, with 1.057 million viewers tuning in, according to preliminary overnight ratings figures from OzTam.

Ten's MasterChef Australia crept closer to the one million viewers mark, winning 934,000 pairs of eyes. But this was only enough to rank it 11th most-watched program.