Hot seat: Who will fill Steady's shoes; Tech giants gaze into a crystal ball and music behemoth to become a media agency? 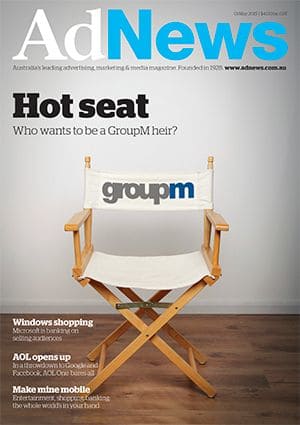 Talk of the town no doubt is the announcement that GroupM executive chairman John Steedman is to exit through the revolving doors for a final time.

Today's issue of AdNews Magazine takes an in-depth look at his legacy and what we can expect from the world's biggest media agency in the future – and more importantly, we crystal-ball gaze in an attempt to predict who might fill his shoes.

“The media world has changed and the people we have here have grown up with it. They're much better positioned to take that leadership role.” (John Steedman, P28)

Elsewhere, two of the original tech behemoths, AOL and Microsoft, divulge their plans for the future, trying to cast themselves in an altogether light, light years away from their incarnations as a search engine and a software provider. Subscribe to AdNews in Print, or get it now on iPad.

“I know how you behave at work, at play, and anywhere in between. That's a pretty valuable way of being able to deliver a great hyper-targeted audience.” (Microsoft Advertising corporate VP, Frank Holland, P14)

In the Marketer we talk to Universal Music Group's Roddy Campbell about how the world's biggest record label is remoulding itself to become a services business, and maybe even a competitor to the media agencies. Bold ambition? Maybe. Impossible? Certainly not.

“It's inefficient if we're building a meaningful brand partnership a business to not look at everything we do as an opportunity for those brands.” (Universal Music Group's Roddy Campbell P16)

In news this week agencies weigh in on management consultants and their firms land grab for their strategy business, Nova Entertainment tests the programmatic waters and Seven moots Chinese TV.

We ask creatives about what they think makes a brand a stayer, in our regular feature Creative Focus. Subscribe to AdNews in Print, or get it now on iPad.