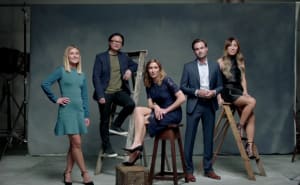 Holden is ramping up for a big brand push to cement its perception in the Australian psyche as it nears the changeover of manufacture from Australia to completely offshore. Last week saw the launch of its 'CARstodians' campaign, which Holden executive director of marketing Geraldine Davys tells AdNews is like the 'entree' to the 'main meal' of what's coming from Holden later this year.

By 2017, Holden will cease manufacturing cars in Australia, so it's no surprise that the brand has opted to feature five Australian celebrities to front its ads to hammer home its Aussie heritage.

But to Davys, the activity is more about “relevance” than it is about Aussie heritage, which plays back into Holden's global owners GM.

“One of the insights we have about modern Australia is around the change in values Australians have. These ambassadors are aligned to that. What Australia was 10 years ago it isn't today - that change in our value systems and what we demand from life is different, so for me its about relevancy rather than being perceived as an Australian iconic brand," she says.

"We're a global brand with local roots, but we have to think global in everything we do in terms of marketing.”

Actors Matthew Le Nevez and Claudia Karvan, chef and restaurateur Luke Nguyen, pro-surfer Nikki Van Dijk and fashion entrepreneur Jane Lu will front campaigns and marketing activity for the coming 12 – 24 months Davys tells AdNews. If successful CARstodians could keep rolling and become more brand led. Additional ambassadors could also be added to the line up as it evolves to remain relevant. The ads were creted by AJF Partnership.

Le Nevez is the recognisable face from TV and brings “longevity”, up and coming surfer Van Dijk is the quintessential Aussie girl, fiercely taking on her rivals and offering an aspirational stance while chef Luke Nguyen represents new modern Australia, says Davys of the stars. He's “multicultural, genuine and really creative”.

“Our brand values are being real, authentic and insightful,” she tells AdNews.

“That's the core of our brand and we wanted to make sure we have people that closely aligned to that. They were selected strategically, and their voices add credibility. They bring an air of authenticity and longevity that has real appeal to our existing Aussie customers and a whole new generation of Aussies as we evolve our brand to talk more overtly to women and younger people, and multicultural Australia. They've all got elements that are consistent with where our brand values need to be.”

Holden is also deliberately attempting to eschew stereotypes that often appear in automotive ads as it looks to appeal to “modern Australians,” and sees no reason why surfer Van Dijk wouldn't feature in an ad for a Commodore – traditionally seen as a more masculine model.

“We're being a bit cheeky about it and not being stereotyped into the normal way of looking at campaigns by using the ambassadors in unusual settings you wouldn’t expect,” Davys explains.

Holden is also battling declining sales. According to the VFacts new car sales figures for May, Holden sales are currently down 6.9% when the market is up 3.6%.

While Davys wouldn't be drawn on the dollar investment in the campaign, she said it's a “worthy investment of what we need to do to drive our brand … the right amount of money to set us up for success. You have to do these things properly, you’ve got the right talent, the right production, and that costs money, but the upfront investment will pay off in the short to medium term.”