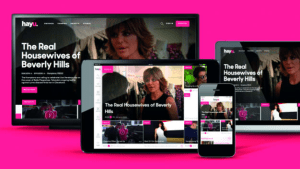 Buzzfeed, News.com.au, Cosmopolitan and OK are just a few of the partners new SVOD competitor Hayu has lined up as it zones in on the Aussie “super fans” of reality TV.

Following the announcement earlier this month that NBCUniversal-owned Hayu will be entering the Australian market, AdNews spoke with the NBCUniversal's marketing director, Shannon Most, and Asia-Pacific managing director, Christine Fellowes.

As well as securing a raft of publishing partners, Hayu, which has 120 shows on its books, will be bolstering its offering with up-to-date social feeds and mood-based rating services for viewers. It's also set to offer programs the same day as they broadcast in the US.

With big players like Netflix, Stan and Presto dominating the SVOD market, Hayu differentiates itself by developing a fully-integrated platform that links to social media and news.

“Hayu is a 360 immersive service that pulls in the up-to-date news and social feeds related to the shows as well as providing thousands of pieces of short form content that has been designed for users to post on their own social feeds,” Most says.

Previously, Foxtel has been the primary host of NBCUniversal content in the Australian market, which includes shows such as Keeping Up With The Kardashians and The Real Housewives.

“As a business we have strong relationships with Foxtel, Fetch and other partners," Most says.

"This is a product that will coexist with paid television and other partners of ours. It’s not exclusive. It comes back to the consumer and what the consumer wants at this point of time,” he adds.

Hayu will have its own editorial team posting reality related content to the platform, adding a level of engagement that could establish it as game-changer in the SVOD category.

Fellowes says the company saw an opportunity to appeal to the huge audience of reality. She says NBCUniversal sought out research company Tapestry, which examined 6000 women worldwide, 1500 of these in Australia. Results showed that 94% engage with reality television.

“The SVOD segment is growing faster than any other segment of the media,” says Fellowes.

“We saw there was a very big fanbase for the content and we knew people were moving quickly to uptake the new technology.

“We don’t see ourselves been competitive to other subscription services or cable television, we have a very singular position for the super fan of reality,” says Fellowes.

The target market for Hayu is called ‘the tribe’ and gives three examples of the demographics that will be accessing this content, including the 18-year-old technologically savvy girl, the career-focused 29-year-old and the 42-year-old mother who gets her recommendations from friends.

The content seems to lean towards the younger demographic, with the interactive social aspect as well as the mood-based rating service where a user will determine the ‘vibe’ of the clip through emojis such as the crying with laughter face.

“When I think of the hard core reality fan, it tends to be a young female and she is the one that is going to be using the emoji moods and be posting on Snapchat, but there is quite a broad demographic,” says Fellowes.

Most says the shareable snippets were made primarily with the consumer in mind, but recognises the opportunity for organic advertising it has provided.

“Being able to serve the content that fans love in a way that people will engage with it and share it is a great opportunity in terms of marketing, and great for our customer,” Most says.

For future marketing pushes, Most says there will be a significant investment in a large campaign that will bring fans into the service and introduce the product to market.