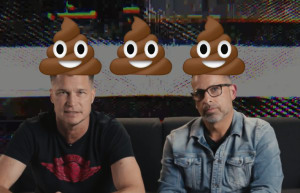 The video, which was distributed internally to the network’s approximately 4000 employees in North America and features Peterson, alongside CEO and chairman Paul Marobella, was intended to update staff about the progress of the work.

Havas said it’s the first of a series of videos meant to break free from traditional corporate update emails and share work from across the region.

In the clip, Peterson calls out other multinational agencies as “shitty”, as poo emojis appear on the screen, and says the agency’s real competition is “kids with iPhones and millions of YouTube followers”.

“Our industry has allowed agencies to become vendors. We are no longer in a position to be vendors. We want to be the place where clients come to and are excited to learn and understand how to market in this crazy world we live in now,” Peterson said.

“Our industry is still founded on a model built in the 1960s with an art director and a copy writer. Our world has changed and our creative output has changed. To move from creatives to creators simply means we have an idea and we have the ability to make it ourselves.”

Marobella said there are three priorities for Havas including improving reputation, improving relationships with staff and clients and drive revenue.

"We're actually a business, and driving profitable revenue for us is a priority because it allows us to have nice things … like a juice bar," he said.

Appearing on industry gossip app Fishbowl, the video was criticised as “desperate” and “cringe worthy”, but AdNews admires the quirky approach.