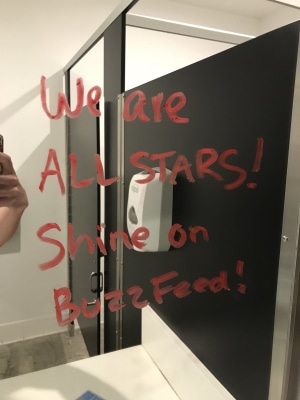 Dozens of BuzzFeed employees have taken to Twitter to share their reactions to the news around 220 staff will be made redundant.

In a series of tweets, BuzzFeed journalists have described the situation as "agonising," "heartbreaking," and "surreal".

It was revealed on Friday that BuzzFeed would axe 15% of its global workforce after failing to diversify its revenue. More details have now emerged with redundancies made in the New York office impacting the entire national desk, which specialises in long-term features, the health desk, the national security desk and the entertainment team.

The website's LGBT desk, an area of coverage in which BuzzFeed News had invested significant resources, has been left with only one staffer in the New York office, according to CNN.

Likewise, in the UK 17 of 37 editorial roles will be cut from the London office with majority of losses coming from the UK buzz team, and also cuts to news and celebrity teams.

AdNews understands the Australian operations will be notified this week on their roles.

One BuzzFeed employee, David Mack, said he was "broken" to hear about the "horrifyingly large chuck" of the news team being axed.

After four years, I learned today that Monday will be my last day at BuzzFeed. My entire team was also let go. I don't even know what to say right now. I'm sad, shocked, and so deeply disappointed on so many levels.

It's sadly my turn to tweet: After four wonderful years at BuzzFeed, it's time for me to say a very sad goodbye to my role as senior lifestyle editor.

A hui hou! After more than 6 years at BuzzFeed, I have been laid off. I’m proud of the work I’ve done from my remote position in Hawaii and honored to have worked with so many brilliant people. Please send job ideas and aloha here: mbrodervandyke@gmail.com

After six years, my time at BuzzFeed has come to an end. I'm really proud of the work I've done here, and I'm grateful to all of you who have supported me over the years.

I’ve been laid off. I’m extraordinarily proud of the work I and my colleagues have done during my 6 and half years at BuzzFeed. It was an extraordinary group of reporters and editors to work with.

Yep, it's true. The entire national security desk at BuzzFeed News has been disbanded.

It wasn't around for long, but for a year and a half we punched way, way above our weight and I'm fiercely proud of the work we did here under @markseibel.

Ex-BuzzFeed employees have also shared their condolences for staff impacted by redundancies.

Punkee editor Tahlia Pritchard, who previously worked at BuzzFeed, wrote on Twitter: "It’s hard to comprehend the amount of smart/witty/clever/hard working people BuzzFeed has cut today, with more to come. Thoughts go out to all the amazing people who lost their jobs, because the calibre of talent is so bloody high."

It’s hard to comprehend the amount of smart/witty/clever/hard working people BuzzFeed has cut today, with more to come. Thoughts go out to all the amazing people who lost their jobs, because the calibre of talent is so bloody high.

CEO Jonah Peretti said in an all-staff email that the cuts were necessary to "focus on content that was working" as well as lower costs and maintain growth.

However, some questioned if Peretti was really focusing on the right type of content or just pivoting to softer news, with the journalists cut credited for major stories on Trump's administration, Russia's involvement in the US election and LGBTQI issues.

I see *lots* of folks who worked on LGBTQI issues, women's health, tv/film representation, and mental health being hit in these BuzzFeed layoffs. These are people who dug into their own experiences and (sometimes trauma) for content and they deserve better than a 3AM email.

Last week's layoffs come a little over a year after BuzzFeed cut about 100 employees, including a handful from the Australian office, after it missed its 2017 revenue target.

The media company has been experimenting with other streams of revenues, including a subscription service, introducing banner ads and piloting a membership model that asks readers to chip in with donations.

The news of editorial layoffs at BuzzFeed follows a challenged week for the news industry overall with HuffPost also making redundancies.

In 2018, AdNews predicted the digital media bubble was beginning to burst as other companies, such as Vice, missed their financial targets. It seems this trend will continue in 2019 as digital publishers begin to face the same revenue problems that have plagued traditional print media for the last decade.

In classic BuzzFeed-style, ex-employees have started a crowdfounding page to buy staff impacted by redundancies a beer across Los Angeles, San Francisco, New York, DC and London. You can donate here.