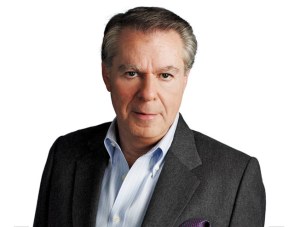 Australian marketers have “gone too far” in shifting media budgets into digital channels and it's addressable advertising that will allow television to compete for ad dollars in the lower parts of the marketing funnel.

That's the verdict of GroupM's global chairman Irwin Gotlieb, who delivered his views on media planning, targeting and addressable TV advertising at the Future of TV conference last week.

Chief among his concerns is that he believes marketers have become too concerned by “picking the low hanging fruit” rather than “watering the roots of the tree”, and this is having a negative impact on the pulling power of brands, illustrated by apathy towards brands from millennials.

“Australia has an issue in that allocation against digital has gone further than it should. We know that the per capita expense of digital media in Australia is probably the highest in the world,” Gotlieb says.

“When you look at the percentage spent on television it is one of the lowest in the world when you consider markets that have fully developed television industries.

“The decline of television's share of ad expenditure in this market has been more severe than most. It probably warrants a good careful look and a thorough understanding, not just in terms of ad expenditure, but in terms of the percentage of impressions delivered from digital media compared to TV.”

Gotlieb points out that in the US there is a minor rebalancing occurring, which has also occurred in the UK and other leading media markets.

“A correction of some sort is probably in order [in Australia], certainly an evaluation is in order and TV addressability is one very, very effective path to getting better value for client's money,” he adds.

Gotlieb, leader of the world's largest media investment group, says it is time for the media and marketing industry to rethink its gravitation towards digital media and targeting.

“I think we have too much focus on targeting. When a client puts a gun to our head and says we need to generate savings, the easiest way to deliver those savings is to develop a more refined and narrower market,” he says.

“But you sow the seeds of your own destruction. One of the reasons we have this issue with millennials and branding is that we moved too heavily into digital in a too targeted a fashion and have forgotten some of the fundamentals of marketing.”

The GroupM chief believes that television has become “a bit of a standing ice cube” considering its business potential.

“Managing decline is not a position that television should be in,” Gotlieb says. “Part of the problem is there is an affinity in marketing circles to exploit targeting opportunities and it is a way to save money.

“Television has been put into this little box called 'top of the funnel awareness' and has never been able to exploit the money that is directed at every other level of the marketing funnel.”

Gotlieb says that there are no longer reasons why TV should be excluded from lower parts of the marketing funnel because there is the data and technology to support granular targeting of TV inventory based on factors like consideration, preference and where in the purchase cycle a consumer is.

“Technology for addressability has been around for a number of years and, quite frankly it is not being exploited. So shame on all of us,” he says.

Although addressable TV can only be delivered to households rather than individuals, Gotlieb says targeting can become more granular on a “probabilistical” basis when you consider the type of content being watched, for example a children's cartoon versus live sports versus a dating reality TV format.

“What wouldn't you do with this capability? Television has always been our most effective means of communication," he adds.

"It has a reliable supply chain, there are few known integrity issues, very few, if any, brand safety issues and we have known and accepted viewability standards that we trade on. What's been missing is the targeting opportunity.”

He also stated that GroupM is ready and able to invest client money in addressable TV advertising when it rolls out in Australia.

“I didn't just come down all this way for kicks,” he says. “In markets where we do have addressability going, the constraint is inventory for now and we spend more time explaining to clients why they can't invest more.”

Gotlieb points out that today between 70% to 80% of marketing budgets go towards trade support, such as in-store promotions and sampling. He believes this contradicts the reality that television and other forms of above the line media offer better bang for a marketer's buck.

“There are a lot components such as sampling that is not very efficient and couponing is cost poor," Gotlieb explains. "If you talk about a $40 CPM (for TV), do the maths – you are 4 cents per impression. A coupon costs you 50 cents to a buck – and that's a prime time TV spot.

“Television as a medium is engaging, compelling, safe but importantly it is relatively efficient and certainly when compared to areas where clients allocate 70-80% of their budgets.”

Although Gotlieb believes addressable advertising can help TV reach further down the marketing funnel, he warns CMOs that if they ignore top of the funnel investment, they do so "at their own peril."

He explains: “If you focus too heavily on targeting, what you are doing is you're identifying the lowest hanging fruit and you are allocating all of your resources to plucking that low hanging fruit. But lest you forget to water the tree, there is no next generation of fruit. One can not over-emphasise the importance of top of the funnel marketing.”

Although addressable advertising should help TV play further down the funnel, marketers who turn the hose away from top of the funnel marketing and focus purely on cutting cost will lose out in the end.