Google is the 'terminator', but will keep publishers alive 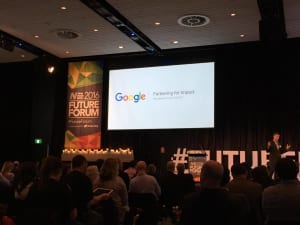 Speaking on the adverse impact of Google on publishers, Whitfield likened Google to The Terminator, but added that the tech giant needs media companies to complete its dominant ecosystem.

Whitfield’s opinion is one held by many across the industry. One media mogul previously told AdNews that Google is holding publishers “for ransom” - You can read more in our new magazine here.

But despite some backlash, Google head of global partnerships APAC Banks Baker remained adamant keeping publishers alive is part of the company’s mission.

“Google is highly reliant on an open web, so it is critical to us that news content providers remain successful,” Baker said at the Future Forum event held in Sydney.

“The vast majority of our revenue comes from revenue shares of successful sales of digital media from publisher’s like yourselves – without your success, we don’t have success.

“We have a vested interest in making sure news media remains viable and a profitable business and new content remains a consistent part of digital consumption.”

While Baker believes Google can solve the problems publishers are having, he admitted it hasn’t always been successful at giving publishers the most from the partnership. But that is going to change, with the company creating a single voice to communicate with media businesses.

Baker spoke at the Ivy on Friday on the trends Google is detecting for news organisations in Asia and how the digital giant is partnering with publishers to grow audience and advertising revenue.

One example of this that Baker gave was Accelerate Mobile Pages (AMP) Google launched in 2015. The tool allows publishers to develop articles that load quicker in the mobile web.

Speaking to a room of potential clients, Baker said speed is a “major issue” for publishers, with 60% of content being “completely wasted” unless it has quick load times.

“Speed of content delivery is incredibly important,” he said. “If you are not delivering content quickly in this mobile-based, need-it-know world, your users will disappear, your ability to monetise that content will be severely limited.

“Nobody will wait around for a page that takes longer than 10 seconds.”

Another challenge for the industry Baker identified is ad delivery – particularly disruptive, slow advertising that impacts the user experience.

“If we look at slow, annoying advertising – it’s a killer to the relationships you have. It means you will have lower performance for advertisers,” he said.

But even if you deliver a bad ad fast, you won’t win friends, Baker explained. Recently, Google took a stance against “intrusive” interstitial ads, with publishers displaying that ad format to be penalised in mobile search rankings as of next year.

“We expect we will see a massive shift towards native placements and native video placements as we go towards 2020,” Baker said.

With global bandwidth capabilities expected to advance, digital video ad spend is tipped to grow from $9b to $22b by 2021.

"Monetisation opportunities are coming from bandwidth. We have video that is pouring into the region. Brands know that video is a compelling way to connect with consumers and the dollars are following.

"When you look at video spend shifting from TV to digital - those dollar are not going to display. If you have a lot of display, you aren't going to take advantage of this shift."