Gloves off: Google's Pellegrino and News Corp's Sheffield open up about digital 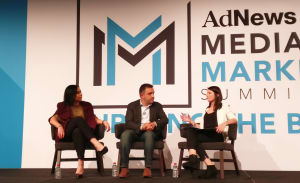 The media and marketing industry has been “terrible” at selling the benefits of marketing, placed too much focus on attribution rather than discovery and will greatly benefit from new daily digital ratings, two of Australia’s top digital leaders have said.

They spoke at length about brand safety, the benefits of the IAB/Nielsen’s imminent digital content ratings and whether the tech giant should take more responsibility over funding content creation as it consumes a growing slice of the advertising pie.

Pellegrino opened the discussion with an apology for YouTube’s brand safety issue that had caused several top advertisers to pause investment in the video platform.

“We've let a lot of people down in the industry and we know that we need to do better and we've recognised that,” he said.

“At the time there were a lot of – quite rightly – heated debates, I was involved in a lot of very pointed discussion where the statement was I need you to guarantee me 100% brand safety, what are you going to do about it towards a position now where there's a recognition that there is not a media platform out there that can guarantee 100% brand safety.

Pellegrino says a “substantial portion” of advertisers worked through that process “really, really quickly” and made the choice that the risk reward trade off was fine.

He said many of the brands that initially paused on investment have now decided to re-invest while others both locally and internationally are continuing a temporary YouTube boycott.

The brand safety issue has focused heavily on YouTube but in reality Google Display Network has also been a concern for advertisers, particularly with ads appearing on undesirable websites, such as those featuring extreme views, terrorist sympathisers, fake news and pornography.

Pellegrino says that alongside the improvements to YouTube, Google has also been tightening controls around its Google Display Network.

He says this has been a much simpler fix because it doesn’t involve video environment that has challenges around context.

An example, he points out, is profanity, whether it is being used in a music video or unsafe brand environment, it’s more difficult to pick this up on video at scale.

“On GDN, the vast majority of content is textual based and it’s much easier to pick up context and provide controls against that,” he says.

Both Pellegrino and Sheffield were asked to respond to World Federation of Advertisers research about global marketers continuing to spend on digital despite reservations about the channel’s effectiveness. The research was drawn upon earlier at the event during Mark Ritson’s The nine circles of digital hell presentation.

“The reality is 20 million Australians are on digital every month, which is pretty much anyone over the age of 14. If you are a marketer, you don't actually have a choice,” Sheffield said.

“Whatever you think of Mark Ritson and his nuttiness, at the end of the day what he is talking about is the marketing funnel and that's absolutely true. We've spent so much time of late worrying about attribution and that last piece of that marketing funnel when so much, whether it's print media, television broadcasts, etcetera, is at the top of the funnel, in the discovery end.

Pellegrino adds that fighting against the media consumption trend towards digital platforms or “trying to prove it’s not happening is counter-productive”.

However, he added: “I think we’ve done an incredibly bad job as an industry in proving the value of marketing and media to CEOs and boards across all channels. How do I know that? Because the growth in spend is incredibly anaemic.

“If we got it right, we’d be empowering CMOs to go to the CEOs and CMOs and saying ‘give me more money, because for every dollar you give me, I know I can deliver you ‘x’ or ‘y’.”

An area that both digital heavyweights could agree on was the benefits of daily digital content ratings that are soon to be launched by the IAB and Nielsen.

Sheffield says these daily ratings will provide digital publishers and advertisers with many benefits and indicated it could revolutionise how digital is advertising is sold.

“Firstly, it allows us to measure off platforms. For the first time as a publisher I can attribute my Google AMP or my Facebook Instant Articles or my off platform audiences to my overall UA,” she said.

“The second thing is that it’s daily and we’ve talked a lot about the power of digital and what does that mean when you look at the power of television. The fundamental thing television does is it gives you daily ratings.”

An example Sheffield used is that the week leading up to the AFL grand final, the Herald Sun will have “insane traffic”, but News Corp is unable to monetise it any differently to other weeks in October because unique audience is measured on a monthly basis. The same applies for daily events like the Melbourne Cup or Vogues Fashion Night Out.

“Other than sell more volume and reach, I can’t really get higher CPMs and I can’t guarantee that – I certainly can’t break up time parts,” she said.

“I can try to do them but it’s all very manual and experimental with the agencies. Digital daily ratings allows you to do that.”

Sheffield said this will allow digital to have its own ‘prime time’ like other media, which could revolutionise the way digital media is traded by weighting inventory during peak and trough periods.

Another aspect that excites Sheffield is that the IAB has committed to independent measurement through Nielsen.

Pellegrino says the DCR will make digital reporting more comparable with other forms of media.

“It allows you to inject confidence into the people making the decisions,” he says. “There’s always going to be some error, or definitions we can improve, but it’s definitely a step forward. You’ll stop getting some of the numbers that are put out there without context.”

The curse of ‘transparency’

Unsurprisingly, both took aim at the use of ‘transparency’ as a stick to beat digital with. Pellegrino argued the term is used as a broad brush to tar the whole industry with negativity when each of the issues – brand safety, ad fraud, viewability, digital supply chain, etcetera – are separate issues that warrant specific treatment.

Sheffield believes transparency is often used by certain quarters of the industry to target viewability, ad fraud and digital more broadly when it should be “addressing the real transparency issue, which is that of agencies”.

“How much are we being transparent about what the clients are paying versus what the publishers are getting and that’s where there’s a lot of clouded judgement,” Sheffield questioned.

“Over here we like to focus on viewability and ad fraud but I don’t think it’s nearly as big an issue here as it is in a lot of other countries. Whereas the ANA in the US very vocally looked at transparency in terms of the agency models and what a marketer is actually getting for their investment.

While broadly agreeing with Sheffield’s premise, Pellegrino launched a defence of the role of agencies, arguing: “there’s a fundamental question of fair payment for fair value. What is the role of marketing teams in purchasing in creating that problem themselves and how do they work through that?”

The discussion then took a thorny turn onto Google’s role in advertising and whether the tech giant needs to take greater responsibility in the marketing ecosystem.

It’s a debate AdNews will reveal later this week.