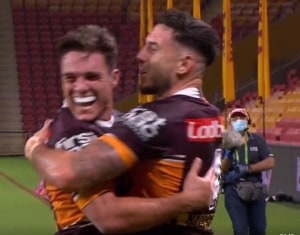 Foxtel will save at least $180 million over the next three years from reduced fees for broadcast rights to sport.

The price paid for major sports is typically kept confidential between the sporting code and the media partner.

However, News Corp’s global CEO Robert Thomson, during an analyst briefing, gave a glimpse into the outcome for Foxtel.

Earlier this year Thomson said there needed to be a reset on the fees paid for broadcast rights. They were too expensive.

Subscriber numbers for Kayo, Foxtel’s streaming sports platform, fell by a third in April to 272,000 as live sport disappeared in the social restrictions imposed to combat the coronavirus crisis.

Then Thomson said: “The idea that things will suddenly turn to normal ... is absurd. It's not just the quantity of games, it's the quality of the experience, and that has obviously been diminished."

Broadcasters have re-negotiated rights to broadcast the NRL and AFL with significant cost savings. But the size of those savings isn’t known exactly.

“That has absolutely come to pass,” Thomson told the latest briefing, outlining results for the fourth quarter.

“While negotiations with some sports continue, deals already completed will reduce the cost of sports rights at Foxtel by at least AUD$180 million over the next three years as compared to the prior contracted value.

“This reset will have a positive long-term impact on Foxtel’s profitability.”

Foxtel has negotiated another seven years for the NRL and has until at least to 2022 with the AFL.

The pressure to cut broadcast rights fees was building long before the pandemic stopped games.

Brian Hann, senior equities analyst at Morningstar: “Live sports on TV may be a ‘battering ram’ to grow TV audience (as Mr Rupert Murdoch famously declared in 1996), but paying too much for that battering ram will marginalise the benefit eventually.”

Investment bank Jefferies estimates Australian media companies spend around $3 billion on content rights every year. Just under half (45%) is for sport.

During the pandemic, Nine Entertainment extended its deal with the NRL to 2022 and Seven West Media has also extended its AFL deal.

The savings are substantial for Nine. According to a statement lodged with the ASX, Nine expects a benefit, resulting from changes in rights fee and associated production and services arrangements, of about $27.5 million each year in the 2021 and 2022 financial years.

But the biggest saving was for the financial year which just closed. Nine’s calculations indicate that its total savings, calculated previously at $130 million if the rugby season didn’t restart, would be around $66 million.

This is the difference between the previous cash cost out guidance of $289 million and the new one at $225 million. How much of this is the actual cash paid to the NRL, and how much is reduced production costs, hasn’t been revealed.