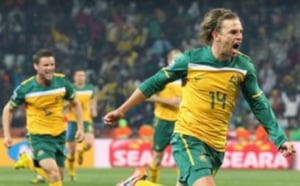 Was the lack of a major sponsor a factor in Socceroo legend Brett Holman's decision to retire?

Foxtel has welcomed the federal government’s extension of funding to support coverage of women’s, niche and other under-represented sports.

“With six dedicated sports channels and a wide range of sports news, Fox Sports has a strong commitment to broadcasting sports and events that may not otherwise receive television coverage,” says Fletcher.

However, Greens spokesperson for media and communications Senator Sarah Hanson-Young said: "Giving tens of millions to Fox Sports while cutting funding to the ABC really is the height of arrogance."

Foxtel CEO Patrick Delany says the funding consolidates a long-term program of support for under-represented sport which has been a game-changer for  women’s sport in Australia.

“In a world where sports media is a source of inspiration and excitement for people of every age group, continuing coverage of under-represented sports has a vital role to play in increasing participation at the grass-roots level and creating new opportunities for Australia’s incredibly talented female and male athletes," he says.

“Since the start of the program in 2018, we have seen the careers of many athletes in under-represented sports, particularly female athletes, flourish. It has also served as an inspiration to a new generation of sportswomen and men at every level."

Foxtel reports annually to the Department of Infrastructure, Transport, Regional Development and Communications on deliverables associated with the funding.

In its most recent report for the 2019 financial year, Foxtel’s investment in the acquisition and broadcast of under-represented sports exceeded the $7.5 million in government funding for that year reflecting its passion for bringing more diverse coverage of sports to fans.