Foxtel defends against SVOD onslaught: "We must act like disruptors" 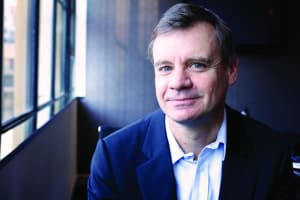 Foxtel CEO Richard Freudenstein has said “there really is no comparison between Foxtel and any of its competitors” as he defends the service against the onslaught of streaming video on demand (SVOD) services.

Addressing the Australia Israel Chamber of Commerce, Freudenstein said in the digital age businesses need to focus on consumers in three key ways in order to be successful: having a great product; making it good value for money; and continuing to innovate.

“But the perception among some, particularly those shy, retiring types on social media, is that Foxtel's model is out of date and will not succeed in this new world,” he said.

“While there is an enormous amount of video content available, relatively few people have the true creative genius required to make great television.

“Let me spell it out for you in some detail, because there has been a lot of myth-making on this subject when the reality is very stark.”

Freudenstein said he wasn't interested in denigrating SVOD services, but wanted to make it clear that what they offer is a different product to what Foxtel provides.

He said his analogy for SVOD is that they are the “digital video store” used by people who want to supplement their free-to-air viewing, similar to the way they used to rent the occasional DVD. He said this view is based on the fact that in the US and UK, SVOD has grown in direct proportion to the decline in DVD revenues while subscription has continued to grow.

Meanwhile, Freudenstein pointed to Foxtel's content of sport, exclusive TV shows from the US and UK, and locally produced Australian TV, as core differentiators of its offering.

“It doesn't matter how good your technology or how ingenious your business model, if you don't have great content you'll struggle,” Freudenstein warned.

“By that measure there really is no comparison between Foxtel and any of its competitors.

“We are also ensuring that our great content is available to our customers whenever and however they want it. While many people love to watch linear channels, increasingly the ideal viewer experience is about control, flexibility and mobility.”

Freudenstein said for this reason Foxtel has invested in innovation including its iQ3 box and Foxtel Go.

Research from Roy Morgan released last week found that only 7.3% of Foxtel's households were subscripting to Netflix, a rate close to the national Netflix take-up of 8% of all households. Roy Morgan Research GM media Tim Martin said at the time that it suggested many of Foxtel's customers are trailing Netflix as an add-on rather than a replacement.

“In just four months, Netflix has expanded the total market up to over a third of all homes,” Martin said. “So far, it appears Foxtel hasn't been damaged by the arrival of Netflix.”

Freudenstein said he believes that in the future the vast majority of Australian homes will either have Foxtel or an SVOD service and that many will have both.

He also said Foxtel will take on the disruption in the landscape in three ways: leveraging the strength of its assets; acting like disruptors itself; and accepting there is room for incumbents and new entrants alike.

“It’s a positive for Foxtel that more people have started to pay for television,” Freudenstein said.

“By subscribing to a SVOD service they will come to see what they are missing out on, in both the range of content available and the convenience of watching where and when they want.

“One consequence of this will be that more people will take a look at Foxtel and see a service that has even better and more recent content.”