Fairfax staff go back to work; petition to save them grows

After stopping work for the weekend as part of strike action, Fairfax editorial staff this morning have re-entered the newsroom, as petitions to save their jobs receive 26,000 signatures.

In a show of solidarity, journalists who decided to strike until today all met at the Fairfax buildings in both Sydney and Melbourne to re-enter their offices together to show management they remain united.

Fairfax editorial staff at The Sydney Morning Herald, The Age, The Brisbane Times, The Canberra Times and The Australian Financial Review voted to go on strike late last week, after the publisher announced that it was set to axe 120 jobs from its newsrooms.

Jobs at the SMH, The Age and The AFR will be most effected, with the cuts representing 12.5% of its newsrooms.

The same day staff decided to strike, The Media, Entertainment and Arts Alliance union (MEAA) launched a change.org petition and a petition on its own site, with its CEO Paul Murphy saying these proposed cuts are a “body blow”.

"It's the staff on the newsroom floor who have driven the transition to digital and through all the challenges continued to produce high quality independent journalism. And this is the reward. Yet another savage cut to editorial. We will be fighting for every job," Murphy says. 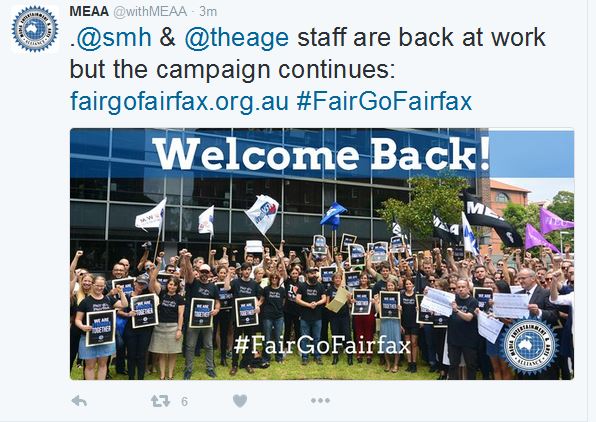 The petition on the MEAA site has garnered 10,498 signatures, with the signatures on charge.org reaching 16,000.

At the time of the announcement about job cuts Fairfax Media CEO, Greg Hywood, said: "The initiatives we have proposed today are part of that adaptation and are necessary to sustain high quality journalism.”

In today's Australian, the media section is running an article headed 'Hywood has no plan', around the cuts.