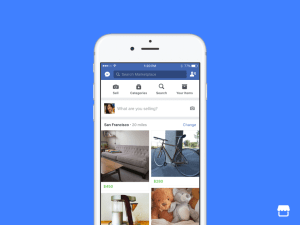 Facebook is formalising its ‘buy and sell’ groups by launching a tab in its app dedicated to peer-to-peer shopping. The move will allow the social network compete with the likes of eBay, Gumtree and Craigslist.

The Marketplace, announced overnight on its website, allows users to easily connect with others nearby who are selling products and services. Its integration with Facebook Messenger lets users identify who they are dealing with and provides a platform to haggle or arrange a meet up.

It’s an evolution of an existing behaviour on the social network, with more than 450 million people visiting 'buy and sell' groups each month on Facebook.

Marketplace has launched today in the US, UK, Australia and New Zealand and is being tested in Chile. Facebook is also implementing an age restriction of 18 and older to buy or sell. The digital giant says it will roll the feature out to additional countries in the coming months.

The move from Facebook cements its push into e-commerce and gives users more reason to spend time within its ecosystem. While the company will not handle payment or delivery inside the marketplace, it does put them in a good position to mine data on search and sales to then serve to advertisers.

It’s not the first time Facebook has tapped the commerce category, trialling its first ‘Marketplace’ for classified listening in 2007. However, it never gained traction and was shut down in 2014.

According to British newspaper The Independent, the company is expected to roll out the Marketplace feature to businesses too.

Facebook has been working to bring traditional retailers to its site, launching chat bots within its Messenger service for brands.

EBay’s share price fell nearly 3% in the morning trading after details of Marketplace were revealed, and with Amazon set to launch in Australia – the buy and sell category is about get shaken up.