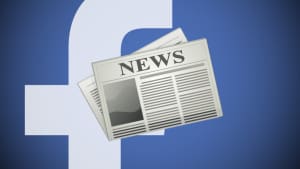 More people are reading the news through Facebook - so what does that mean for publishers? Check out AdNews first monthly issue to find out

If you look at Snapchat’s rise to the top, MySpace’s rapid decline and Yahoo being sold for a fraction of what it was worth eight years ago, it's never been clearer the media industry is unpredictable. Facebook's role in the change and challenges facing publishers and the media is constantly revisited and just this week founder Mark Zuckerberg tried to distance his company from being called a "media company".

It’s no secret Facebook and Google have challenged the monetisation model of publishers. The threat they pose to content producers has made headlines globally.  Facebook firmly positioned in the mediascape as part of the digital duopoly competing with publishers.

The topic was raised at a livestreamed Q&A session on Monday, when a viewer asked the CEO about Facebook’s role in the media and whether the company sees itself as a publisher.

Zuckerberg responded saying: "When you think about a media company, you know, people are producing content, people are editing content, and that’s not us. We’re a technology company. We build tools. We do not produce the content."

Media moguls, including Seven West Media CEO Tim Worner and Vice co-founder Shane Smith, have previously questioned how much power the industry hands over to this digital duopoly.

However, Facebook’s local managing director, Stephen Scheeler believes the idea of a Google and Facebook duopoly is “naïve”. Players, such as Snapchat, emerge everyday and threaten to become new powerhouses.

“They say Facebook is doomed because it’s loosing users to Snapchat – so what is it? Are we super dominant or about to disappear?” Scheeler asks.

“There are plenty of other platforms. Snapchat came out of nowhere. Even 12 months ago Snapchat wouldn’t have been taken seriously and now they are.”

He says News Corp and Fairfax were the first duopoly, but because of the rise of digital, the power shifted.

“Competition is a great thing. It keeps you honest. It keeps the media evolving over time. The previous powerhouse duopoly of Australia newspapers has competition now. Rivalry is a robust force that will continue to play out for digital media – including for Facebook and Google. We are very conscious we have tonnes of smart, agile competitors – we’re not immune to competition,” he says.

Scheeler was speaking to AdNews on the ever-increasing strength of Facebook and the impact is having on Australian publishers, for our cover feature "The content profit squeeze - publishers held to ransom" in our September issue out tomorrow.

Scheeler is the first to admit Facebook isn’t safe from the threat of competition - or irrelevancy - in an industry which can turn on a dime.

“We know we could end up like Yahoo. Only a few years ago Yahoo was worth $200 billion – it just sold for $4 billion. It didn’t make the pivots it had to make to survive and flourish. We live in a world where just a few years ago MySpace had more users than Facebook. We are the last company on Earth that thinks we are here to stay. We to need to pivot and evolve,” he says.

Facebook received significant backlash from publishers when it made its last algorithm update to prioritise content from family and friends.

Publishers questioned if it would change the ecosystem of content visibility they’d come to rely on.

While Scheeler says he understands publishers’ frustration, he believes one of the reasons Facebook has remained a dominant competitor in the social media circuit is because it’s committed to reinventing and changing itself for the benefit of users.

“I hear the argument but the option is we don’t change it and we lose audience, and then we don’t have anyone to present [publishers'] content to,” he says.

“If you think of it another way and we make no updates – it’s bad for us, our audience and publishers. We need to be consumer led by everything we do and there will be some ripples because of that. There are some things that won’t absolutely line up because of our consumer focus.”

Scheeler says Facebook didn’t dictate the shift in consumer behaviour, rather responded quickly to the global change from analog to digital and then to mobile.

“The transition is challenging – It's a big challenge for us and it’s a big challenge for advertisers and publishers. Anytime any industry goes through rapid change there are those who can keep up and there are those that can’t and that is what we are seeing in our industry. We are running as fast as we can to keep up and we are not complacent. We do not think we are here forever."

You can read the full feature "The content profit squeeze - publishers held to ransom" in the September issue of the new AdNews monthly coming out tomorrow (2 September). You can download a digital version on desktop, Android and Apple for $5.99, or subscribe in print here.