Facebook talks AI and VR in its 10-year plan 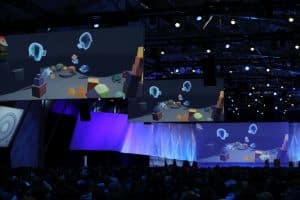 Facebook has outlined its 10-year plan at the second day of its F8 conference, with the social behemoth eyeing off artificial intelligence (AI), virtual reality (VR) and augmented reality (AR).

In the opening keynote of the day, Facebook's chief technology officer, Mike Schroepfer, talked about how the network's ultimate goal is to connect everyone and how it can continue to do that by developing new platforms such as AI and VR.

These platforms are at the end of the plan, meaning we can maybe expect them sometime in 2026. However Facebook's director of applied machine learning, Joaquin Quiñonero Candela, explained that it is already dabbling with AI, building a 'backbone' which already powers much of the Facebook experience.

The business is currently focusing on building systems that can understand images at the individual pixel level, which could lead to greater functionality for visually impaired people, creating things such as talking pictures. Facebook is also focusing on real-time video classification, which would allow computer vision techniques to watch videos and, in real-time, understand and classify what's in them without using tags or surrounding content.

Facebook also announced at F8 that it's recently established social VR team is investigating how people interact with VR, as well as exploring the technology's long-term use possibilities.

The company is looking to crack some of the VR challenges which include working on combining a sense of presence with the ability to interact with the environment and communicating through body language as well as voice.

On day one of F8, Facebook outlined that is was finally launching the beta phase for bots in its Messenger app. These bots will soon allow people to to book hotel rooms, check flight details and get shopping receipts.