Facebook takes another swipe at Snapchat with new features 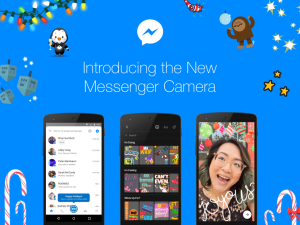 Facebook’s latest attempt to clone the success of Snapchat is making its way to Messenger with a bunch of Snap-esque masks and effects.

The company’s standalone messaging app now has a quicker-to-shoot camera, with familiar features once pioneered by its rivals.

It pretty much does everything users have come to expect from Snapchat’s cameras, from stickers and emojis, masks, frames, Prisma-copying features and other effects. There are a few holiday themed effects already available, like a reindeer mask.

Facebook is introducing the changes to reflect that people are communicating more often with images than they used to. “In some ways the camera is now replacing the keyboard,” Facebook said, noting that over 2.5 billion emojis, photos, stickers and videos are already sent every day with the service.

It is also hoping to encourage users to start sharing more on its platform and less on its competitors.

Unfortunately for Snapchat, Facebook has a huge advantage in this game with its one billion-strong Messenger user base and ubiquity on all platforms.

Facebook says the product is rolling out globally for both iOS and Android starting today.