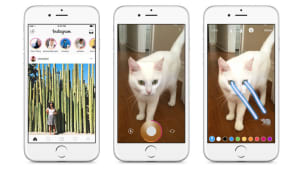 Instagram Stories, released today, let’s people share photos and videos that have a life span of no more than 24 hours with friends who follow them. The service bears a striking resemblance to Snapchat Stories – allowing users to post 24-hour ephemeral photo and video slideshows that disappear.

The move could ignite a head-to-head battle between Instagram, owned by Facebook since 2012, and Snapchat, which have previously played in each other’s territory in the fight for the elusive eyes of millennials.

In 2013, Facebook offered to buy Snapchat for US$3 billion but the offer was rejected by founder Evan Spiegel. With a takeover ruled out, Instagram is clearly trying to tap into a way to appeal to the younger audience on Snapchat.

Instagram CEO and founder Kevin Systrom freely admitted Snapchat "deserves all the credit", an interview with TechCrunch, adding major tech companies have been stealing from each other for years.

It isn’t the first time Facebook or Instagram have attempted to claw at Snapchat’s success. In 2013, the photo-sharing app launched Instagram Direct, a private messaging feature which was later removed. A year later, Facebook launched Slingshot, an independent app that mimicked Snapchat’s disappearing features. It was pulled out of the App Store last year.

“With Instagram Stories, you don’t have to worry about overposting. Instead, you can share as much as you want throughout the day - with as much creativity as you want,” wrote Instagram on its blog.

“You can bring your story to life in new ways with text and drawing tools. The photos and videos will disappear after 24 hours and won’t appear on your profile grid or in your feed.”

The feature was launched ahead of the Rio Olympics. Instagram says it expects both athletes and fans to use the Instagram Stories to share their experiences at the Games. Serena Williams is kicking off as the first athlete to share her travels and preparations for Rio through the new feature.