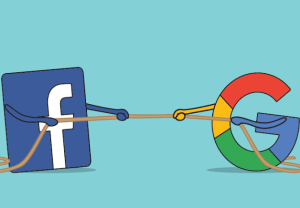 Google and Facebook’s share of US digital advertising growth slowed in the second quarter of 2017 as other digital publishers nearly doubled their growth rates from previous years, according to analysis by Pivotal Research Group (PRG).

This suggests that brand safety fears and metrics mishaps have had a minor impact on the share of the two largest players, but the report also warns that digital ad spend saturation point is also arriving.

PRG analysis, prepared by senior research analyst Brian Weiser, estimates two biggest digital media players captured 83% of growth in digital advertising in Q2, which is less than the 88% observed in 2016.

The reporting period occurred in the wake of YouTube’s brand safety scandal at the start of this year and indicates that brands shifted some of their budgets away from YouTube into other digital media.

Industry sources advised AdNews at the time that a similar trend occurred in Australia.

Are we reaching peak digital?

If it grew at 20% experienced in recent quarters, digital would monopolise advertising by 2022 before returning to market growth rates.

“Of course, neither of these scenarios are likely to occur as laid out here, not least as other media (television in particular) will be somewhat resilient, and we assume a gradual deceleration for digital media owners is more likely rather than any other scenario,” Weiser noted.

“But the bigger point is that digital media owners are gradually approaching the point of saturating available digital budgets. This helps explain why digital media owners – and Facebook in particular – have become more aggressive in finding ways to capture television advertising budgets in recent periods.”

Weiser notes that the principal risks for digital advertising companies include a high degree of rivalry due to an absence of barriers to new competition as well as government regulations and consumer pushback related to concerns about how tech titans use consumer data and manage respect for privacy.

For example, German regulators are investigating how Facebook scoops up user information outside of its social network to drive targeted advertising solutions within it.

In Australia, the ACCC are investigating the market power of Google and Facebook while European regulators recently slapped Facebook with a €110m fine for providing misleading information about data-sharing between Facebook and WhatsApp.