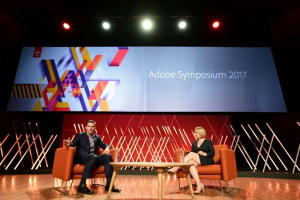 Movie star Eric Bana has praised the importance of radio as a marketing medium when it comes to reaching the Australian market.

Speaking at the Adobe Symposium at the Sydney Opera House, Bana touched on marketing considerations when launching a movie Down Under and also shared his views on the creative process as a director.

Despite the event focusing on the digital realms of marketing, Bana was quick to praise radio as a marketing channel.

He said when he goes to the US to do a film promotion and asks when he's doing radio promotion, he's told “it's not important to us here”, and they'd rather he just hopped on The Tonight Show.

“In Australia radio is really important as it directly connects you to to a lot of the market place,” Bana said.

“It's about taking those different ideas [we have here] into different areas.”

When it comes to launching a movie and the marketing collateral around that, Bana bemoaned the process Australia endures when it comes to marketing movies. He said just four weeks before the movie is out is when marketing ramps up, adding that only a few posters are put up and by the time you’re aware of the film that you intended to see, the movie has gone.

“That's the Australian formula but we try to break that mould and try to create awareness very early and try to do things differently,” Bana said.

“It is changing in some respects. The major studios are realising they cant just buy saturation of the market place. Awareness is not necessarily what correlates with people turning up to the cinema.

“It has changed a little bit but a lot of the old models are still firmly in place.”

The power the original idea

On the social media front Bana said he uses Twitter to talk about things he likes, such as cars, not so much movie-related topics. He said he enjoys some of the creative he sees, such as on Instagram, but he prefers to enjoy as a consumer, as opposed to creating content himself.

Australian Bana, who was being interviewed by Adobe head of marketing Australia and New Zealand, Jadanne Dare, said while there is some great short form TV shows making waves, the audience hunger is still there for long form film content.

“The audience has a huge appetite for long form as well and I firmly believe that that comes from the fact they truly understand they're being treated very intelligently with such content, as the quality is very high,” Bana said.

He also spoke about his time behind the camera as a director, referring to his 2009 documentary Love the Beast, which documents his lifelong obsession with cars and the destruction of his first vehicle.

“The most important thing in the creative process is the original idea,” Bana explained.

He said “chasing the dream, chasing a number or chasing a result” isn’t the be all and end all and staying true to your original idea is what will take you far.

Adobe is no stranger to rolling out A-list movie stars after a hardcore day of digital marketing insights. Check out these previous AdNews stories: