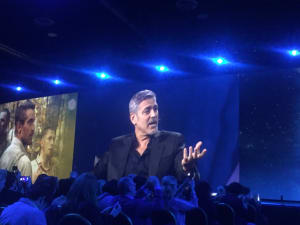 From slamming his Batman film and referencing that #Susanalbumparty, to getting old and hating Twitter, actor George Clooney today took to the stage at Adobe Summit for a one-on-one with its CMO.

The Graham Norton-style on-stage chitchat was a far cry from the event’s other sessions – covering the likes of driving personalization, customer experience and marketing analytics, but attendees seem to enjoy the lighthearted Clooney wisecracks.

Adobe CMO & EVP Ann Lewnes kicked straight off by question the star on past film choices and the comments he made relating to Twitter.

“Most people don’t get to make the decision about what films to take. Some of you may not know that I almost destroyed the Batman franchise. I tried, I did the best could – I wore rubber nipples and everything.”

Moving on from the movies, Lewnes asked him about his previous negative comments towards Twitter, having once said “I think anyone who is famous is a moron if they are on Twitter”.

“I do think that if you are well-known there is only a downside for it,” Clooney says.

He added after a few drinks if he took to Twitter he could “get in a lot of trouble” as he’s “certainly capable of it” – making references to Susan Boyle’s album party tweet which went viral. In case you missed it, it was #Susanalbumparty. Say no more.

Clooney also commented on the changing distribution methods of content, adding that the way you can storytell now and watch content anywhere, opens up millions of different avenues.

“I think that what’s happening in our film industry is interesting,” Clooney says, adding that storytelling is really opening up.

He said for a long period of time television had its limitations, mostly because of standards and practices, but now, if you look at the shows that are made, not just for TV, but for for Netflix etc, he said the production quality and the storytelling is so much better than the quality of most of the films you see now.

“That ability to tell a story over 10 episodes as opposed to stretching out to 22 episodes – the whole way this is working now – such as downloading 10 episodes of Making a Murderer, or even watch things on the plane – it’s miraculous,” he says.

“I think it’s great for our industry in general and opens up millions of avenues of how to make and work in the entertainment industry.

“There’s five times more work than there was five years who which is great.”

Clooney, who also added that he had fears about the “anonymity” behind online comments, went on to discuss his reputation of being an industry prankster.

Clooney’s session followed on from a warm up by entertainer and entrepreneur Donny Osmond; a session with Mattel COO Richard Dickson, as well as world champion soccer player Abby Wambach and Cirque Du Soleil VP of sales and marketing Alma Derricks.