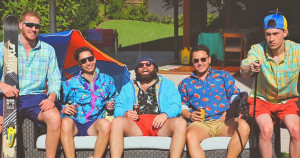 A Brisbane clothing brand has come under fire for a marketing email that jokingly threatened its customers with blackmail.

YP Threads, a brand which sells bold shirts, board shorts and socks for men, sent out an email to its 17,000-strong mailing list saying it had incriminating photos of its user base.

The email said it was would expose the photos unless people bought various items from its website and liked its Facebook page.

It finished with: “We know where you live. Time starts now.”

The email marketing campaign was called out on yesterday’s episode of Triple J Hack and slammed as a “shocking attempt at marketing and humour” by host Tom Tilley.

While the email was intended to be a joke, many users didn’t see the funny side, with one person that received the email believing he was being blackmailed. He added he was “freaked out” by the marketing push.

Simon Bell, a marketing professor at the University of Melbourne, said it wasn’t the worse marketing campaign he’s seen from a brand and would have likely have a positive impact on sales.

“Whether a marketing campaign falls flat or not can often times depend on a brand’s tone of voice or how they are positioned within the minds of consumers,” Bell said.

When questioned if he thought YP Threads intentionally pulled off this stunt to drive up awareness of the brand Bell responded: “There’s no doubt that firms take that tactic and especially firms at the end of that irreverent spectrum.

“I would imagine very much that this could be intentional whereby controversy of the message itself leads to more eyeballs," Bell said.

He said the brand didn’t intend to be “deliberately salacious or malicious”, but it was simply a bad judgement call.

One customer on the show said he would no longer shop with the brand, which Kelder said he takes seriously.

The idea for the campaign came from an external marketing company, Kelder explained, and he didn’t expect this response. He did reveal that the campaign has so far, had a positive impact.

“It has turned out in our favour in terms of sales and we had a bit of a spike in traffic. We had a lot more opened emails and sales as a result,” he said.

Compared to Pepsi’s Kendell Jenner stunt last year, and Dove’s ‘White is Purity’ ad, Bell said there has been a lot worse marketing calls made.

“It can impact on the business but often times, companies survive these controversial marketing efforts because of customer inertia,” he said.

You can listen to the Hack segment here.