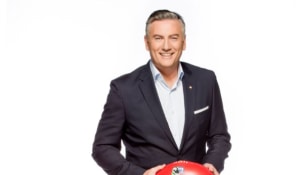 Eddie McGuire has slammed Facebook advertising as “completely bogus” as he vows to sue the digital giant over a fake story that claimed he had had erectile dysfunction.

A Facebook post, which was created to resemble GQ magazine, has emerged on social media featuring the broadcaster pushing an erectile dysfunction product called “TryVexan”.

Speaking on Ten’s The Project last night, McGuire came out swinging against Facebook and its founder Mark Zuckerberg.

“If you’re going to have deep pockets by having advertising, you might want to check whether or not it’s completely bogus,” he said.

“If you’re going to pretend to be a news organisation, you can’t be one and not the other. It’s time some of these things got pulled up.”

He explained that his legal team are investigating how the article was posted to Facebook, with findings so far revealing the ad was created in Panama and being run through multiple domains.

On Triple M, McGuire said he was going to “sue the arse off” Facebook and said it was “defamatory” and “completely incorrect”.

The fictional story has since been removed from Facebook.

McGuire isn’t the first celebrity to be caught up in a Facebook scam. A popular British consumer advice expert and TV presenter Martin Lewis is currently suing Facebook for defamation, claiming the social media network failed to prevent criminals from buying more than 50 scam adverts that ripped off his public image to commit fraud.

In 2015, Lisa Wilkinson also faced a similar situation when her image was used to promote a “miracle skincare treatment” on Facebook.

Facebook’s failures have been highly publicised in recent months with fake news furore seeing traditional media organisations reap the benefits. Most recently, the Cambridge Analytica scandal has challenged the industry and its users to rethink the data it shares with digital platforms.

A Facebook spokesperson says: “We do not allow adverts which are misleading or false on Facebook and Eddie McGuire should report any adverts that infringe his rights and they will be removed.”