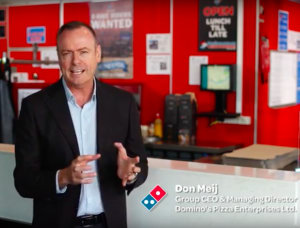 The CEOs of Australian listed companies are reporting huge pay increases in spite of declining trust in business, analysis by the Australian Council of Superannuation Investors (ACSI) has found.

Domino’s boss Don Meji is the highest paid CEO among the ASX 200, earning $36.8 million in realised pay in FY17.

Meji’s reported pay in Domino’s 2017 Annual Report was only $4.6 million, with the rest made up by the value of options exercised during the fiscal year. The value of Meji's stock options had risen nearly five-fold between 2013, when he received them, and 2016, when he cashed them in.

The median realised pay for an ASX 100 CEO increased a staggering 12.4% to $4.36 million - well above the nearly anaemic pay rises experienced by many rank and file workers across the country.

This is largely being driven by generous hikes in bonuses. The median bonus for an ASX 100 boss was up 20% to $1.76 million. In fact, the report said that CEOs are more likely to lose their job than their bonus.

CEO of the Australian Council of Superannuation Investors (ACSI), Louise Davidson, slammed some of the pay rises being offered to CEOs when the average wages of Australian workers remains stagnant, particularly the propensity of companies (80%) to reward CEOs bonuses.

“The increase in pay levels for CEOs occurs at a time when public trust in business is at a low ebb, and wages growth in the broader economy can best be described as anaemic,” Davidson said.

“Against this background, decisions to significantly increase bonuses appear not only tone-deaf but also make me wonder whether boards have lost sight of the link between community and investor expectations, and a company’s social licence to operate.

“This may have the consequence of further damaging community perceptions of business. We see a real prospect of regulatory intervention if the current trend continues.”