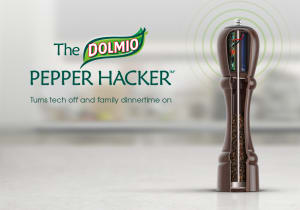 Clemenger and Mars Foods are offering Dolmio customers the chance to win their very own Pepper Hacker - a pepper grinder that secretly disables mobile devices with a single turn.

The device sparked a wave of customer interest after starring in a viral Dolmio campaign that received more than 100 million views across Facebook and YouTube.

The aim of the campaign is to showcase how much more special family meal times are when mobile devices such as smartphones and tablets don't come to the dining table. The device works by connecting to a home Wi-Fi network and disabling up to four devices for 30 minutes.

Unsurprisingly, Pepper Hacker proved a hit with parents who have the perennial battle of trying to prise away children glued to their digital toys.

“We listened to our customers and decided that we simply had to create the Pepper Hacker en masse," Mars Foods Australia marketing director Tim Hicks says.

“Sitting around a table and connecting over food is one of the most beneficial times of the day, helping families catch-up, have fun and really connect. The Pepper Hacker reminds us of the influence technology has over us and how we can all benefit from a little down time from it."

Dolmio is making more than 3,500 Pepper Hackers available in a national on-pack giveaway.

To celebrate the launch, Clemenger BBDO Sydney and AMV BBDO London have created an online film to showcase just why a device like the Pepper-Hacker is needed at dinner time.

Clemenger BBDO Sydney ECD Paul Nagy says the tool is a great way to bring to life the fact that when you disconnect you connect.

“It seemed the whole of Australia (and half the world) wanted a Pepper Hacker of their own after they saw the film last year,” he says. “To see them coming to life this year at scale is something we’re very proud of indeed.”