Do we need to drink beer? Canadian Club challenges the idea 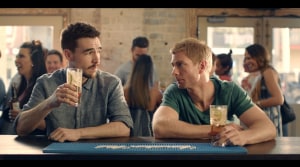 The Monkeys has released its first work for Beam Suntory brand Canadian Club Whiskey after picking up the account in May this year.

The campaign continues to challenge Australia’s beer drinking culture with the slogan: "Over Beer?"

It features several men in a pub questioning their alliance to beer set to a remix of Johnny Nash's I Can See Clearly Now.

One man says: "I thought beer was compulsory."

Another says: "I only drink it because my dad drank it."

The "Over Beer" slogan was introduced in 2011 by former agency The Works.

The Monkeys creative director Scott Dettrick says: “The challenge was to take on beer in Australia. We drink it, our dads drink it and their dads drank it too. It’s in our cultural DNA. However, Australia is changing and our drink choices are too.

“The campaign shows that beer isn’t everything that it’s cracked up to be; it has been bloating our bellies and making our breath bad for far too long."

Beam Suntory marketing manager Tiffany Madsen adds: “We know beer is synonymous with Australian culture, however Canadian Club’s success shows there is something in challenging the conventional wisdom of beer.

"When we’re given permission to not choose beer, it’s strangely liberating. We’re not suggesting Australians stop drinking beer, but rather reconsider their love affair with the liquid.”

The campaign is set to run across broadcast, cinema, print and outdoor.