Disney's Kevin Mayer on locally produced content: 'we have a mission' 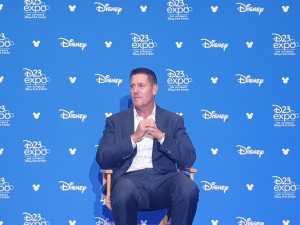 While Mayer, who has been the driving force behind Disney+, didn't name Australia specifically, he told media that recently hired, and former Netflix director of original film, Matt Brodlie had been tasked with developing local content.

Australia and New Zealand will likely be areas of focus for the content exec, given the decision by Disney to include the two countries as early markets to receive the service.

"Brodlie has a mission to find and create content in markets where we need it and we will also be buying content which we believe will have substantial appeal," Mayer told media at the D23 conference in California.

"We try to prioritise quality over quantity and we do a few things, but we do them really well. So we aren't after large volumes on Disney+ but we are after projects and content that consumers will really love."

Mayer says if the company can find content that fits that mold, then Disney will produce or buy it. He says the company will also be sure to manage regulatory policies in markets that require a certain level of local content.

In Australia, no less than 55% of all the programming shown on a primary television service between 6am and midnight across a year has to be Australian. However, this has not yet been defined for streaming players.

Speaking to AdNews, Mayer reiterated that Australia was an important market to the business, citing solid broadband services and content that resonated with local consumers as reasons behind the country being named as one of the first launch markets internationally.

While speculation continues to mount over what Disney+ arriving in Australia will mean for existing content partners, such as Stan and Foxtel locally, Mayer says linear was "not going away" and that the company would continue to give the first run of new content produced for its linear channels to international pay-TV providers.

"We designed Disney+ to be a complimentary service, for the time being. We are not going to offer in most markets current seasons of Disney channel content [on Disney+], we are offering last season content instead," Mayer says.

"That means that the only place you could get current season content is through your pay-TV operator."

This week has seen a slew of announcements made about the platform, including its Australian launch date and price point, the appointment of a new local head of streaming, a raft of new Melbourne-based roles and several new original shows and films made for the platform.