Dentsu and Toyota form their own advertising company 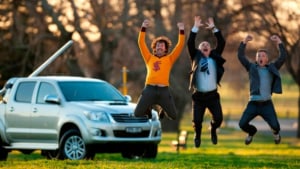 Japan-based holding company Dentsu Group and Toyota have agreed to form an advertising company to promote the automaker in a world dominated by social media.

Toyota will own 66% of the holding company, called Delphys, and Dentsu 34%.

The car maker says the partnership will go beyond the domain of an advertising agency and that of an automobile manufacturer.

Delphys will have two operating companies -- one for marketing, the other for digital communications and the use of data -- to start operations in January.

It is unclear how the latest move by Dentsu and Toyota will impact the Australian market. Toyota's creative agency is Publicis.

However, Dentsu and Toyota are seeking approvals from competition authorities in "the countries concerned".

Dentsu said in a statement: "Instead of using conventional methods, the aim is to go beyond the realm of automobile manufacturers and advertising agencies by accurately grasping information such as customer situations and needs, developing new businesses, and proposing them to the world."

Toyota said: "Due to the rapid proliferation in recent years of blogs, social networking services, and other forms of social media, the main conveyors of information now include not only members of the mass media but also a diverse range of entities such as individuals and companies. In tandem, the methods for information transmission are also diversifying."