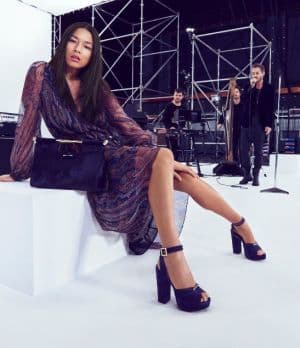 David Jones has ditched the traditional TV ad, choosing to launch its 2015 spring/summer campaign in a very different way.

The retailer has partnered with Australian musician Daniel Johns to create the world’s first fashion shoot captured by musical instruments.

The shoot was controlled by the music, with images captured by 42 customised cameras set up on a rig that were triggered by John’s vocals and the band’s instruments.

Paul Bradbury, CEO Whybin\TBWA Group, David Jones’ creative agency of record, said: “#ShotbySound is undeniable proof of the power of collaboration. At every stage of this project we were humbled by the talent who contributed and added their bit of magic.”

The music video replaces the retailer’s seasonal TV ad with the campaign launching on the David Jones YouTube channel today with 15-second edits of the music video to be released across David Jones’ social channels to amplify the content.

The series of #ShotbySound images will feature in the retailer’s spring/summer 2015 campaign comprising of outdoor advertising, inserts, catalogues, online and social media, to roll out next month.

David Jones general manager marketing communications, Victoria Doidge said: “Creativity and design are inherent in enduring fashion brands and as the home of Australia’s leading international and local designers they are core to David Jones’ identity.”

She added that musicians have always pushed the boundaries of fashion and have long been style icons that we admire and mirror.

Watch the spot for yourself below: