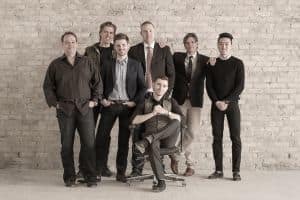 Cummins lived in Canada until the age of 10 and said that, for him, this move feels like a homecoming.

“Canada has a very talented creative pool, the market is very similar to Australia’s, plus it’s a country to which I still feel very much connected,” said Cummins.

“I’m excited for the agency I launched to make an impact in the country where I was born. It feels like I’m coming home.”

Leading the team in Canada are Toronto partners Dave Carey, former partner-client service at Union Creative, and senior vice president client services at Lowe Roche, and Andrew Shortt, formerly a founding partner at HQvB. They will guide the growth of the Canadian arm of the agency and ensure it lives up to the Cummins&Partners legacy of disruption.

“It’s a global agency that’s still independently owned. There aren’t a lot of other agencies in Canada that can make that claim.”

“The opportunity to introduce one of the best agencies in the world to Canada was just too good to pass up,” said Shortt, ECD and partner. “Cummins&Partners has quickly built an international reputation for innovation and creativity, and Sean himself is an inspiration. This is going to be an incredible journey.”

Cummins&Partners is focusing on technology and innovation, as well as redressing the gender bias in advertising.

“I laughed when we got together for this photo and we were all blokes,” said Cummins. “But we are very pro-women and we are about to announce our female partners shortly. Having women as owners and partners has been key to our success worldwide.”

Cummins& PartnersCanada is currently open for business with 11 staff members and a roster of five clients, including a global financial company, Heidi Klum Intimates, Perrier-Jouët and VDKA6100. The first work from the agency will launch at the end of April.

The Toronto shop is the second new Cummins&Partners agency to open in the past few months, with the agency expanding to Sydney at the beginning of this year to service the Vodafone account.