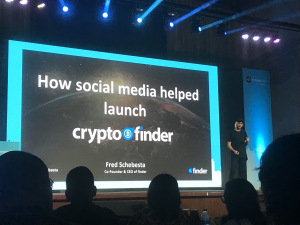 Finder is moving into the cryptocurrency comparison space as founder Fred Schebesta predicts the new foray will establish Finder as the “Amazon of comparison sites”.

“If I was going to start again, internet companies have grinded out but cryptocurrency companies are hot,” he said.

“Cryptocurrencies will be one of the biggest revolutions we will see in our lifetime.”

Schebesta began exploring the area of cryptocurrencies several months ago on Finder and has already seen a huge demand for content.

Finder publishes 1500 piece of content a month, with content marketing a significant part of the brand’s marketing strategy.

Schebesta revealed the demand for content on cryptocurrencies is 10 times as strong as other topics Finder covers, such as insurance, credit cards and telcos.

"Cryptocurrency is the fastest growing niche on Finder that we’ve experienced,” he said, adding cryptocurrencies have allowed Finder to explore other channels, like Reddit and Telegram.

"Twitter has been dying in some countries, but with cryptocurrencies it's massive."

Conversations on cryptocurrencies are thriving on mediums outside of mainstream channels

One predictions piece that Finder produced on cryptocurrencies was picked up around the world and had 146 mentions in the media, which Schebesta said was a huge achievement for the site.

To capitalise on the growing interest, Schebesta is launching a cryptocurrency podcast as well as an internet TV show.

While there are some sceptics out there that believe the cryptocurrencies bubble will burst, Schebesta said he takes the “bullish view” that it will be around forever.

AdNews also spoke to Schebesta about his skepticism around the effectiveness of TV. Read more here.