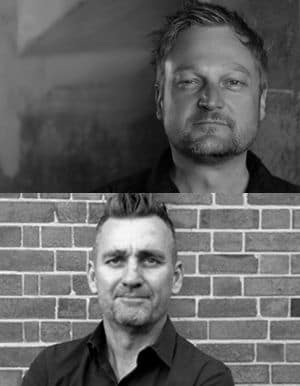 First up, a few words from the creatives themselves:

AG From the positive looking world of Australia Post to an epic Paspaley spot. Great mix of TVCs to review from some of the bigger players and some from the not so big. It’s going to be interesting who comes out on top and why.

PF There’s a great choice of work to look at this week, most with an Aussie slant and voice in the executions. Some will make you glad to be Australian and others may make you cringe. Sounds just like a group of family and friends I happen to know.

AG This is a great, well-shot ad. Bright and extremely positive. It shows all the great things about life in Australia, and in today’s world of Amazon and eBay., it demonstrates how Australia Post gives you a chance to get in on the action. ‘We don’t just deliver bills to your door, you know’ makes starting a small business look so easy and fun, with a bit of Fleetwood Mac for that extra bounce. I’d say it answered the brief well.

PF What a positive commercial. The artisan is back and craft is what it’s all about these days (in my world anyway). With online players like Etsy taking the world by storm, lounge room and bedroom entrepreneurs are now bigger and better than ever. There are parcels landing desks in our office on a daily basis backing this up. We love to champion Aussie-made and Australia Post owning that for these clever small business people is terrific. Taking the position ‘we love delivering’ adds a little charm and care to a delivery industry that can sometimes be cold and ‘careless’.

AG Oh dear, I can see the brief now. ‘Yes, we want one of those brand ad things please because we want to tell people about our bank. You know, those things that most people don’t trust and get upset about when they post quarterly profits larger than the GDP of Belgium.The production budget is $10k. In fact, we have so little budget for this brand ad that we’re going to get a school choir to do the music track for free (which was the best bit by the way). Oh, and we want to make it fun and happy and joyous because that’s what our bank is all about. One more thing - Bob in admin, who did a six week graphic design course in 1987 - has had this great idea. I feel sorry for the team that got that brief.

PF I’m not sure if this ad is incredibly sweet and charming or a little annoying. There is no evidence in this commercial to back up the claim that ‘Me is a bank built just for you (me)’. Budget looks like it could have been a massive restraint with this job. Congratulations to St Joan of Arc School choir, Handel would have a little smile on his face.

AG Jeez, what is it with all these gambling ads at the moment? They are like the smoking ads from back in the 60s and 70s. All these slick geezers, with their flash suits and their fast talking, they are sooooo cool. Look awesome, take control and you too can be brilliantly successful just like whatshisname. These products are all about oneupmanship. They’re like ads for panty-liners - now with flexi, triple winged thingamabobs so you can live free - only worse. It seems to be a tried and tested formula that’s obviously working, only this one isn’t as cool or slick, probably because it has whatshisname in it.

PF My dad has always loved a good flutter. He’s had his successes and his fair share of failures over the years as well. I’m sure he’d be the first one to tell me that if he’d had access to this style of betting over the past 30 years or so, things would have worked out a little differently as far as his bank balance is concerned. Cue my gorgeous mum rolling her eyes, again. A nicely scripted and funny commercial that will hopefully see my dad back a winner or 50.

AG Wow, I wasn’t expecting that. Starts off exactly where you’d expect and then, hold on a minute we’re having a dig at agency land here. And then, whoa, where are we going now? Twists and turns everywhere. I like that it was trying something different, and because of that I’m not going to get too nitpicky. Don’t know what the budget was but I’m guessing not as much as they would have liked but still, it was a great short film. Enjoyable, intriguing, brave.

PF I was hooked . It reminded me of the dreamy qualities and eeriness of the Australian cinema classic Picnic at Hanging Rock. Model Rhiannon Leach, is fantastic talent and seems to have a real connection with the landscape, like Miranda did in Hanging Rock. Similarly, her agent, Russell, seems out of place just like some of the supporting cast in Hanging Rock. Production is fantastic; locations are beautifully shot; the music and edit are terrific. The great thing is, I hardly saw a product shot at all. Fabulous stuff, when does the next episode come out?

AG Err, ok, I kept switching off with this one so I watched it about five times. I find the Cath and Kim shtick all a bit tiresome. So, then this ad tries it with two affluent women, hilarious - not. What’s it telling me - that Yellow Tail is the wine for people who know nothing about wine? That it’s so bland it goes with anything? It’s just wallpaper. By the way, I found the real Cath and Kim
characters annoying as well. Is that unAustralian?

PF The guys at the agency have very smartly identified that their audience directly correlates with the My Kitchen Rules audience. I don’t watch MKR so I don’t know or appreciate the personalities of Jac & Shaz. But doing a bit of research and seeing that they were runners-up in the competition and described by one of the winners as “nice, gracious people” gives me a bit more of an insight into the strategy. Yellow Tail has always been known for having a great overseas market. I hope they can build that success here too.

AG Now, this spot got me. It got me good and proper. So much so, that I ACTUALLY WENT TO THEIR WEBSITE. It plays on people’s cynicism about the production of electricity, and of everyone being green and good, and all that ‘we’re doing our bit’ that’s so ubiquitous, that you arrive at the logo/tag line at the end asking, ‘How are you any different? I don’t believe you. You lying bastards!’ So I checked them out. Job done. Oh, and yes and it’s nicely shot, well-cast and all that.

PF I like the structure of the script, the beautiful images and the journey of getting to the pack shot. But the actor is just a little hammed up for me. I know he’s an actor, I know that his accent is a ‘pretend’ Aussie accent. His fake looking aged-beard and accompanying brand new beanie don’t help either.