Court: Harold Mitchell liked to ‘get his own way’ and didn’t think much of ‘legal niceties’ 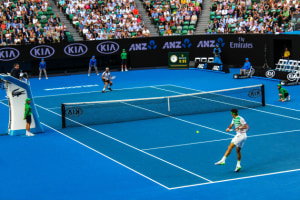 Adman and philanthropist Harold Mitchell has emerged from a major court case, where he was accused of misusing his position as a director of Tennis Australia, as the victor with only minor injuries from his battle with corporate regulator ASIC.

The man most credited with the rise of Australia’s media buying industry was alleged to have given an advantage to Kerry Stokes’ Seven Network during negotiations, when he was a director of Tennis Australia, for rights to televise the Australian open tennis.

However, the Federal Court only accepted some parts of ASIC’s case against Mr Mitchell, that he contravened his director’s duties and that only in a minor way.

The court found that Mitchell “stepped over the line” in his dealings with Bruce McWilliam, the commercial director of Seven, but that this ultimately didn’t cause damage to Tennis Australia.

And the judge, Jonathan Beach, says ASIC’s construction of its evidence against Mitchell displayed “confirmatory bias”.

“The various cover up and conspiracy theories that it floated turned out to lack substance” Justice Beach told the court.

The legal action by regulator ASIC (Australian Securities and Investments Commission) centred on deal making, and backroom maneuvering, in 2012 and 2013 for the broadcast rights to the Australian tennis open.

Tennis Australia’s board of directors in May 2013 accepted the recommendation of its then CEO, Steven Wood, to approve a $195.1 million domestic broadcast rights deal with Seven. The five year deal was well above the $100.75 million struck in the previous agreement in 2007.

According to the judge, Tennis Australia achieved most of its commercial aims in its domestic broadcast rights negotiations with Seven.

At that time, Seven, which had been the television partner of the Australian Open since 1973, was very keen for the deal to be extended.

Mitchell, who started in advertising in 1960 as office boy and was inducted into the AdNews Hall of Fame in 2012, sold his Mitchell & Partners to Aegis for $363 million in 2010.

Evidence and documents submitted to the court, show the actions and style of Mitchell in negotiation mode.

“ … he was one of those characters who often liked to and did get his own way,” the judge said of Mitchell.

“But I am satisfied that in the present context his mindset was bona fide in the sense that he sought to act in the interests of TA (Tennis Australia).”

The judge described Mitchell as not much of a “details” man.

“He did not think much of legal niceties and long form agreements; as he would perceive it, mere matters of detail that had the tendency to produce unnecessary delay,” said the judge.

“I am satisfied that although some of his conduct could be criticised, nevertheless he acted in what he perceived to be TA’s interests.

“But to so conclude does not entail that Mr Mitchell has not contravened some of his director’s duties.”

The court found that Mitchell did contravene his director duties three times but not to the extent that ASIC alleged.

The judge said he is considering a “moderate pecuniary penalty” without Mitchell being disqualified as a director. This means Mitchel can remain as a director of companies, including his current gig at Crown Resorts.

ASIC allegations against fellow Tennis Australia board director Stephen Healy, a lawyer, have also been dismissed by the Federal Court.

The court case, started in November 2018, opened a window on normally secretive negotiations for the exclusive rights to broadcast elite sporting events.

Mitchell, according to allegations made to the court, is said to have summed up the state of sport broadcast rights at the time: “Nine has the cricket, Seven has the tennis and football, and Ten gets the dregs."

He is also alleged to have told then Tennis Australia CEO Wood to “keep off the grass” and don’t try to change anything. Mitchell, in a detailed defence prepared by law firm Gilbert + Tobin, denied this.

The corporate watchdog had compiled emails, phone calls and records of meetings to present its case that Mitchell, then a board director of Tennis Australia, gave confidential information to the Seven Network.

ASIC also alleged that information about other potential bidders for the broadcast rights was kept from the board of Tennis Australia.

The face-to-face negotiations took place during a series of meetings, sometimes in hotels in Melbourne or in corporate offices or at the home of Mitchell.

Another player was Bruce McWIlliam, commercial director of the Seven Network and one of Australia's top media executives. The judge described him as a “colourful character”.

At one stage, McWilliam is said to have described proposed changes by Tennis Australia to a draft agreement for exclusive broadcast rights as a “piece of crap”, a “piece of Swiss cheese” and a “stitch up”.

When the final deal went before the board of directors of Tennis Australia, it was unanimously approved. No director spoke against it.

Wood, the then CEO, agreed under questioning at the Federal Court that he had “wholeheartedly” recommended the deal to the board and that Tennis Australia should not take the risk of going to a competitive tender in an open market.

At the time, the court was told, Mitchell had said that Network Ten was not strong enough financially and Nine had spent its money on the NRL.

Why then did ASIC take Mitchell and his fellow director, Healy, to court?

The questions about the rights deal with Seven came well after the deal was signed.

Kerryn Pratt, appointed to the Tennis Australia board in October 2013, raised questions about the cost of hosting the broadcast.

Healy told Ms Pratt before a board meeting that he was uncomfortable with the process by which the contract with Seven had been negotiated.

According to ASIC, Healy told Pratt: “Please do not raise the issues about the media broadcast contract with the Seven Network at the meeting. It will create disharmony and issues for me and others.”

He then went on to say, according to court documents, that he was “bullied” into a rushed deal by Mitchell.

Pratt is alleged to have told Healy: “I am very concerned about Harold’s conflict of interest in the deal, with his mate Bruce McWilliam, and how the integrity of the board was compromised.”

According to ASIC, Healy replied: “Yes. This is terrible. It will never happen again. I should have stood up to Harold and got independent advice.”

Eventually, the Tennis Australia board had an “an independent inquiry” into whether Mitchell had any conflict of interest in relation to the broadcast rights contract with Seven.

According to ASIC, the inquiry did not interview Mitchell or anyone from Seven although the inquiry was supposed to be into whether Mitchell had a conflict of interest.

Mitchell is now calling for ASIC to be investigated.

“It (ASIC) has expended millions of taxpayers’ dollars in proceedings that have taken their toll on many people, and failed miserably,” Mitchell said in a statement, with the headline “Humiliating defeat for ASIC in tennis rights case”.