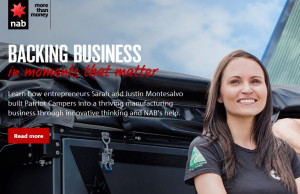 The pitch, which AdNews understands involved The Monkeys and AKQA at the later stages, was a closed pitch that wrapped up two weeks ago.

Clems already works on NAB’s consumer banking account and has done since 2006.

NAB is the agency's biggest client, and adding the business bank is understood to be half as big again. Last month the agency appointed Richie Taaffe from McCann to lead the NAB account as group business director as well as Clemenger's Alexandra Johnson who was brought in as GM on the account.

Clemenger CEO Nick Garrett tells AdNews: “We are very proud of our relationship with NAB and the work we do with them, so extending that by being appointed as the lead creative and digital agency for NAB’s Business Bank is important to us. It’s a very exciting space and important for NAB to have best in class work to grow its leading position in business banking.”

NAB general manager of Business Bank marketing and strategy Suzana Ristevski adds: “The team at Clemenger BBDO Melbourne presented a compelling pitch and demonstrated how to inject bold creativity in to everything we do.”

It’s understood that the pitch was the first that The Monkeys and its new owner Accenture Interactive worked on together from start finish, so not securing it will be a blow to both parties.

Previously Melbourne-based specialist marketing agency The Bridge handled the work. The agency prides itself on all its team having held client side roles prior to going agency side.

NAB chief marketing officer Andrew Knott adds: “As Australia’s largest business bank, NAB has a strong history of backing customers in the moments that matter. We look forward to working with Clemenger BBDO Melbourne to tell more of these extraordinary stories, brilliantly.”

Clemenger was responsible for NAB's 'More than Money' proposition that launched last year, and before that its revered 'Break Up' work.