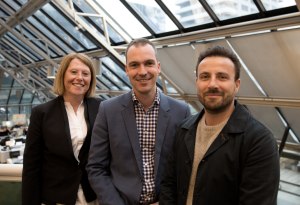 Clemenger Melbourne has promoted within to replace former managing director Paul McMillan, appointing Gayle While to the newly created role of deputy CEO and Simon Lamplough to the role of managing director.

McMillan exited Clemenger for the CEO position of The Monkeys new Melbourne office. He had been with the agency for 11 years.

Both roles will report into CEO Nick Garrett.

Garrett says: “In Gayle and Simon we have two of the best and most progressive leaders in the industry and I am thrilled for them personally and professionally. Their drive, vision and passion for great work, coupled with their focus on where the industry is heading, will play a major part in the future evolution of our agency and ensuring we are well placed to tackle the ever-changing needs of our clients and consumers for years to come.”

While has moved in to her role as deputy CEO after just 18 months with the agency as head of CRM. She joined the agency from CX agency Lavender where she was client services director.

“I couldn’t be more excited than to partner with Simon to support James and Nick in shaping Clemenger BBDO Melbourne for the future. Together, Simon and I hope to build on the agency’s history of great ideas and to drive our continual transformation into a leading modern creative agency not only in the Australian market, but globally," While says.

Lamplough moves in to the agency managing director role from his current role as MD of Myer. He will retain leadership of the Myer team as part of his expanded agency remit.

He has been at the agency for nearly nine years and within BBDO since 2003.

“I’m delighted to get this chance to step forward and help drive our agencies’ change agenda. There is so much we do well, but so much we still need to learn and get better at. I have huge respect for Gayle, and getting the chance to partner with her in this new leadership role is very exciting. Together we hope to achieve a lot," Lamplough says.

Clemenger Melbourne is yet to announce the replacement for chief creative officer Ant Keogh, who left the business earlier this year.