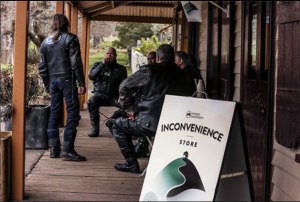 In the Outdoor category at the Cannes Lions awards CHE Proximity has picked up a Silver Lion and Y&R Melbourne took out bronze.

CHE won the award for its work, 'Inconvenience Store', for motorcycle insurance specialist Swann Insurance, designed to give people more reasons to ride.

Swann rebranded a number of small general stores in inconvenient remote places, along some of Australia's best-known motorcycle routes, meaning people have to go on bike rides out of the way to get their usual milk and toilet paper.

McDonald’s campaign, 'Follow The Arches', created by the Canadian agency Cossette, won the Grand Prix in the Outdoor category.

APN Outdoor GM of marketing Charlotte Valente praised the Maccas campaign as a "fantastic example" of minimalism in outdoor adverstising.

“The awards for CHE Proximity and Y&R Melbourne are a great result. CHE and Y&R produced great campaigns that are world-class, as demonstrated by the honour they received at Cannes," Valente says.

“While it’s disappointing our Australian entrants didn’t take home Gold, Outdoor still enjoyed the highest number of entries, with twice as many entries as any other category."

Y&R Melbourne nabbed a bronze for its 'Sip Safe' campaign with Monash University, which has already taken home a Gold Lion in the Health and Wellness category.

In other category wins, Cummins&Partners Melbourne has picked up a Silver Lion for The Australian Intelligence Service 'The Most Interesting Job Interview' campaign, while Ogilvy Sydney won bronze for the 'The Museum That Made a Name For Itself By Changing Its Name', created for the Museum of Contemporary Art Australia.

Clemenger BBDO Brisbane also won two bronze for in the Radio and Audio category for its work with Boating, Camping and Fishing.

In the Mobile category, Whitegrey was the only Australian agency to take home an award, winning bronze for its work with the Missing Persons Advocacy Network and its 'Invisible Friends' campaign.