CHE Proximity CEO Chris Howatson: ‘We’re at the dawn of a new era’ 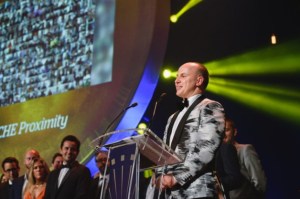 Chris Howatson at the AdNews Agency of the Year Awards

CHE Proximity CEO Chris Howatson said he believes “we’re at the dawn of a new era” in advertising after his agency was named the AdNews Agency of the Year.

“We through last year about what happens when consultancies come into our industry, but what we have, that no one else has, is the power of creativity,” Howatson said.

“We are entering an era where we can use creativity with amazing precision and use data to deliver personalisation that has never been done before and I think for all us, we are on the dawn of a new era.

“Many of us will probably look back and think what it would have been like to work in the advertising era when radio was displaced by TV and in many ways, we are living through that era now, where data is displacing channels in many ways and there are things that are more creative and innovative than ever before.”

Howatson said that when the agency started five years ago, it was impossible to get on pitch lists and get anyone to return his phone calls.

“Bit by bit, late night after late night, hard work after hard work, with great people joining us, we progressed,” he said.

He also thanked AdNews editor Rosie Baker for her contribution to the industry over the past five years, as she finishes as editor today Howatson also paid tribute to The Monkeys, who were a finalist for the Agency of the Year.