An interactive tablet app campaign for luxury car brand Audi across Fairfax-owned titles, The Sydney Morning Herald, The Age and Brisbane Times has achieved strong results in advertising effectiveness. See the results for yourself in the case study below.

To support the pre-launch of the new Audi TT model in market, Audi ran a campaign across Fairfax Media’s The Sydney Morning Herald, The Age and Brisbane Times tablet app properties.

The aim of the campaign was to raise awareness of the new model and showcase the car’s core features using animated creative that displayed the cars design. Overall the campaign delivered strong results, with significant uplifts in ad recall and creative likeability demonstrating the strong cut-through that rich media ads on tablet devices can deliver. In addition, strong directional uplifts were also visible across brand preference, research and purchase intent.

Full page rich media and in-article ad formats ran across The Sydney Morning Herald, The Age and Brisbane Times tablet apps. The full page rich media executions utilised the tablets screen orientation capabilities. When viewed in portrait, users had the ability to tilt the device from side to side, with the animated creative displaying the cars exterior design. When viewed in landscape, the tilted animation showcased the car’s interior features, giving people the sense they’re seated inside the car

The campaign successfully drove tablet app ad recall, with those exposed to the campaign experiencing a significant uplift of 20% points. This uplift was even stronger at 33% points for those that own(ed) a luxury car.

The high ad recall can be linked to creative likeability. Over half (55%) of those exposed agreed they liked the creative, which drove a significant uplift of 23% points when compared to those not exposed. This uplift increased further to 43% points for those that own(ed) a luxury car, displaying that the campaign was very successful among those with an interest in the category. Interestingly, all creative diagnostics metrics measured showed significant uplifts after campaign exposure, showcasing the campaign’s efficacy in communicating its intended messages.

The campaign successfully moved audiences through the purchase funnel; Audi TT after campaign exposure moved to 1st position among its competitive set for brand preference. Furthermore, among those exposed, both research and purchase intent showed strong directional uplifts, displaying that the ad placement combined with the innovative creative execution that allowed audiences to view the cars features and attributes, worked well to raise awareness and drive interest.

The campaign successfully met its objective of conveying the core attributes of Audi TT, with all attributes showing strong uplifts after exposure. In particular, those exposed to the campaign were twice as likely to agree that the Audi TT model is a car for people like them and that it’s a car they would recommend more than others, demonstrating Fairfax Media’s ability to target the right audiences within its tablet app properties.

Click to see the whole case study below and if you have a case study drop us a line and share with AdNews readers adnews@yaffa.com.au 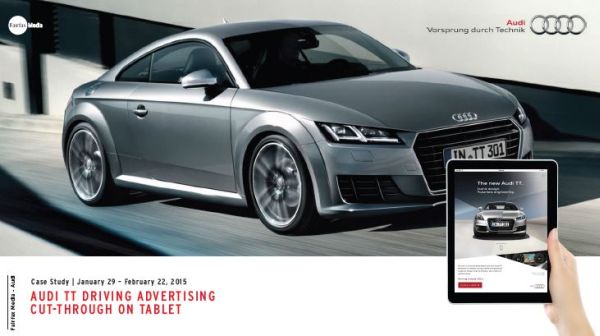