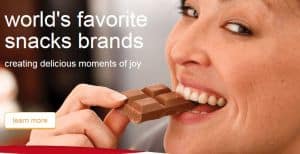 The American multinational confectionery conglomerate announced a review of its two main roster shops, Carat and Starcom MediaVest Group (SMG), back in June.

It is thought the brand, which owns the likes of Cadbury and Vegemite, spends about US$1.5 billion annually. In Australia the account is worth about $28.1 million.

Over the weekend, it was announced that for the North American side of the Mondelez media business, Carat, which previously only handled global communications for the client's chocolate brands only in that region, will now take on the whole media account there. It will also take on its global communications across all product categories.

Carat continues to handle Mondelez in Asia-Pacific and Europe, while SMG holds onto media in Asia, Eastern Europe, the Middle East and Latin America.

Simon Ryan, CEO Carat AUNZ, said: “We are delighted to continue our long-standing relationship with Mondelez in Australia.

“Our team is excited about this next chapter in our partnership and to be a part of their media transformation and quest to be fearless innovators in the digital economy.”

In a statement, Bonin Bough, chief media and e-commerce officer, said centralising its media buying with both Aegis and SMG offers the business a “significant opportunity to drive enterprise-level efficiencies” that can be re-invested in its long-term growth.

“It also enables us to build our capabilities in key areas of our growth strategy, like e-commerce, content monetisation and data driven insights,” Bough said.