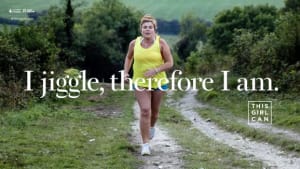 English advertisement 'This Girl Can', by FCB Inferno for Sport England has claimed the Grand Prix for Good at the Lions Health Awards ceremony.

2015 marks the second year the Lions Health has been held, with the awards aiming to highlight creative excellence in healthcare communications.

'This Girl Can', which aims to encourage women to get involved in sports, was directed by Kim Gehrig from Australian production company Revolver. The Grand Prix for Good award is open to Gold Lion winning entires ineligible for a Grand Prix in their section and is judged by members of the Pharma and Health and Wellness Juries as well as representatives for the United Nations Foundation.

AdNews spoke to Gehrig about the campaign, when it first went viral in February.

JWT Sydney was a big winner in the Health and Wellness category with its 'I Touch Myself' campaign for Cancer Council NSW, picking up several awards including two Gold Lions in Film, Film – Use of Music/Sound Design, one silver in PR and three bronze in Integrated Digital Campaign, Integrated and Direct and Promo and Activation.

GPY&R Melbourne's 'Messages From the Front Line' campaign for Defence Force Recruiting picked up a Gold Lion in the Pharma category for Direct and Promo and Activation.

“Even more incredible is the capacity for this idea to span women of all ages, and ultimately be passed down the generations,” Spurgeon said.

“Always has managed to create a legacy by supporting this individual community, which in turn demonstrates the brand's commitment tow omen the world over.”

DigitasLBI New York claimed the first ever grand prix for the Pharma section for its 'Take it from a Fish' campaign for Astra Zeneca.