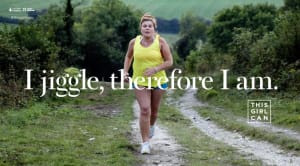 English advertisement 'This Girl Can' is the latest “femvertising” campaign to hit viral status on the internet, and the ad's director, Kim Gehrig from Australian production company Revolver, said it's important for the industry that it has.

The ad for Sport England is by UK firm FCB Inferno and aims to encourage women to get involved in sports. Gehrig became involved in the program through UK production company Somesuch who represent her abroad.

But it's not about sweeping reality under the carpet. Hinging on research which found that a huge barrier for women in sport is that they feel self-conscious, the ad shows real women in all their glory, behind hard- hitting slogans such as “I jiggle therefore I am” and “Sweating like a pig, feeling like a fox.”

Speaking to AdNews, Sydney-based Gehrig said while she had no expectations over how big the clip would be, she believes it's “important” it has made waves.

“When I first got the script from FCB I just really connected with it straight away,” Gehrig said.

“You always make something in a vacuum, so you never really know the response. But I'd hoped [it would go viral], because it's an important message and an important thing for women.”

Gehrig said the idea of using real women to convey the message wasn't originally part of the script. But Gehrig said the piece really came into its own when we went to a Zumba class to see if she might be able to film it.

“It was almost spiritual, the whole thing. They just got lost in it, and it was this moment where they could just be themselves,” Gehrig said.

“It really just inspired the whole piece, that class.”

“Everyone’s got beauty in a way, especially when they’re doing something they love, so we weren't looking for physical beauty, we were looking for people who had a love of sport.”

Gehrig said the other thing she felt was important as a director, was to allow the women to wear their own gym clothes instead of dressing them.

“I wanted them to feel comfortable and I wanted to find a way to get as close to them as I could in terms of the film-making,” Gehrig said.

“I've done sports ads in the past and as soon as you try and dress the women it just takes away from their characters – and, as much as anything, that is what this piece is about.”

“Sam, the woman running, who has the cellulite, that's what she wears: she wears short-shorts. She walked into the casting in hot pants. And I thought: 'that is amazing, it's confidence and I'm not going to cover that up'.”

There have been plenty of recent examples of brands looking to empower women in their advertisements, with many being dubbed “femvertising”. Gehrig said she hopes such advertisements are part of a greater movement in the industry.

“We weren’t selling anything, so it's easier to be more purist in that sense,” Gehrig said.

“But I hope it's an ongoing trend to be honest, that women are spoken to as intelligent, creative individuals rather than just clothes horses.”