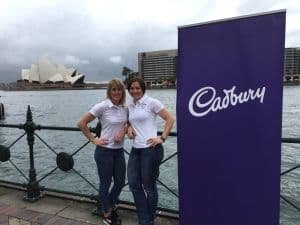 Cadbury has today announced athletes, Anna Meares and Sally Pearson, will be ambassadors for the confectionery giant as part of next year's Australian Olympic Team sponsorship.

During 2016 and the build up to Rio, Meares and Pearson will work with Cadbury to push the brand message of celebrating the “joy” of athletes and fans during the high profile sporting event.

The brand will reveal a series of multichannel activations, with the aim to, “provide Australians with small doses of joy throughout the whole Olympic year”.

It is the latest effort by the brand to zone in on sponsorship marketing, with Cadbury announcing its major new multinational campaign and sponsor partnership with The Voice earlier this year.

Head of strategic partnerships and events at Cadbury, Lauren Fildes, has previously said the brand believes sponsorship is one of the best ways to reach its target audience – mainly being families/mums and kids.

“To make it truly work, sponsorship needs to be a 360 tick-off that consumers will not only remember, but will remember for the right reasons,” Fildes told AdNews.

Cadbury's parent company Mondelez has recently come under fire by public health experts for linking junk food to sport, after the International Olympic Committee faced serious criticism for its ties to McDonald’s and Coca-Cola during the London Games.

In August, Obesity Policy Coalition executive manager Jane Martin told AdNews the association of Cadbury with sport is one of the “greatest global displays of mixed messaging possible”.

“It leads people, children in particular, to believe that sport and junk food are complementary and go hand in hand - when it couldn't be further from the truth,” Martin said.

The multinational confectionery company also announced in August it was the official “chocolate, biscuits and spreads partner of the Australian Olympic team” ahead of Rio 2016, through brands including Cadbury, Oreo and Vegemite.

“Sally and Anna embody the spirit and values of Cadbury and we are delighted to partner with them during our campaign,” Fildes said.

“We take great pride in supporting Australia’s Olympic athletes and we want to celebrate their abilities and achievements. Through the next 12 months, we are looking forward to working with Anna and Sally to bring on the joy."

Gold medal Olympic champion hurdler Sally Pearson, said: "From an athlete's perspective, training for the Olympic Games requires focus, complete dedication and a gruelling training schedule. Once I've competed, I like to relax and allow myself a treat - and nothing does that quite like Cadbury chocolate. I have been a fan of Cadbury for years and I'm delighted to partner with them for Rio 2016."

Double Olympic champion track cyclist Anna Meares said she was, delighted to work with a brand that “holds such a special place in the hearts of Australians”.

“I share Cadbury's belief in bringing joy to the nation and I'll be doing my best to embody this in the lead-up to, and during, the games," she said.