In what is being deemed as a historical move, more and more big networks are taking the pledge by joining agencies such as DDB, BBDO, McCann and JWT, in the Free the Bid movement.

The initiative, created by director Alma Har’el, aims to break what it calls a vicious gender bias cycle across adland. Har’el says the problem is that at the bidding stage, ad agencies typically present three directors per film/ad spot. In doing so most women don’t get a chance to build competitive reels after years of gender bias – and the ad agencies end up with three male directors’ bids.

Other agencies involved include Leo Burnett, Mother, 180 and more. It isn’t yet clear how the Free the Bid movement could roll out in other markets outside of its founding ground, the US. In August, 10 Aussie agencies brought together by AdNews banded together to form ‘The Agency Circle’, a group and charter designed to turn the gender and broader diversity debate into action and change.

Free the Bid’s solution is to get ad agencies and brands to have one woman director bid on every job – giving women a leg up with mandatory bids in commercial directing.

“I’m starting #FreeTheBid so the ad industry can come together and take an affirmative step towards addressing what stops advertisers from working with women directors,” Har’el says.

“I couldn’t have been an independent filmmaker and make the films I love if I didn’t make a living directing commercials. I want to make sure other women filmmakers have the same chance to sustain themselves while being creative and shaping the way women are represented in advertising. We have to start the change right now in the only practical and effective way – Let women be heard.”

She says if half the agencies in the US start to request female directors, the market will have to adjust, and then we will have a much more varied perspective behind the cameras. 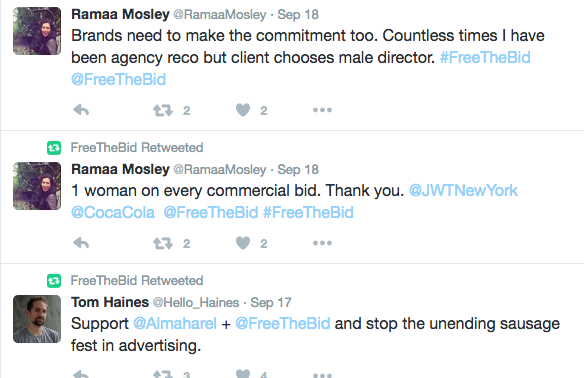 It’s not just ad agencies and production companies onboard, as Coca-Cola, eBay and Nestle Waters have also weighed in.

“Loved the idea and hope every agency in the world makes the pledge so we can solve this problem quickly,” says the Coca-Cola Company’s global VP creative and connection, Rodolfo Echeverría.

The #FreeTheBid website will feature more than 130 signed women directors from all leading production companies including links to their reels and producers. It will also curate new unsigned directors on a monthly basis and will keep track of the work that’s being done by women as a result of the initiative. Organised screenings for ad agencies who want to discover female directors and a system that will allow to track some of the numbers are also in the works, as well as events to showcase the work created from Free the Bid’s success stories. The database is deemed a critical resource that will help the pledged agencies keep their commitment.

Keen to know more about The Agency Circle here in Australia? It's an initiative led by 10 Australian agencies who want to see real change happening in the Australian industry. Clemenger BBDO, Leo Burnett, The Monkeys, M&C Saatchi, Havas Worldwide, Whybin\TBWA, The Hallway, JWT, Ogilvy and VCCP are in and together they’ve drafted a charter for diversity to which members will subscribe.

What do you make of the Free the Bid initiative? Comment below or email your thoughts to pippachambers@yaffa.com.au