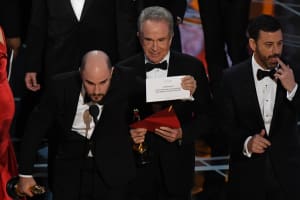 The Oscars are making global headlines for all the wrong reasons, yet a bunch of savvy brands have been quick to make the most of #EnvelopeGate.

Following Warren Beatty reading out the incorrect film as winning picture, the accident has opened up a Pandora’s box of online parodies and brands couldn’t help but jump in on the action. The reactions ranged from savvy, to bizarre and some completely irrelevant.

Not getting the Best Picture? #shouldve #Oscars pic.twitter.com/G9RTp3IDVh

Skittles, Progressive Car Insurance and Ryanair are also milking the event, as well as smaller brands.

Look on the bright side, you’re ALWAYS right when you’re opening a bag of Skittles! #envelopegate pic.twitter.com/oC76iJDTuM

Get the name wrong? We offer 24hr grace periods to correct minor errors. So you won’t be left in La La Land. #Oscars https://t.co/OJfTN8vOrA pic.twitter.com/his6t9hJiZ

The general reaction to the incident was expectedly shock, from viewers and celebrities alike.

According to The Hollywood Reporter, this year’s Oscars recorded the lowest TV ratings since 2008, with an estimated 33 million viewers worldwide, down 4% from 2016.

Mobile advertising tech company, Amobee, gathered social insights from the night, reporting these as the top 10 most talked about brands during the Oscars:

There were 78.2k tweets about The New York Times while the Oscars were screening, making it the most mentioned company of the evening. This possibly comes off the back of the magazine's latest billboard campaign and its Oscars TV ad debut, which drew the attention of President Trump.

Non-for-profit organisation, the American Civil Liberties Union (A.C.L.U.), ranked in at second place, with celebrities including Karlie Kloss, Busy Philips and Emma Stone creating awareness of the union by donning a blue ribbon in support.