Brands get behind Mardi Gras 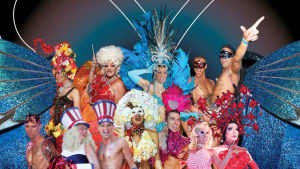 Get your glitter ready because the Sydney Gay and Lesbian Mardi Gras is here and many brands have got behind the annual celebration.

Facebook, Airbnb, Qantas, Medibank, ANZ, Kiis, Google and SBS are all among the sponsors of this year’s festival, which celebrates how far Australia has come in accepting and embracing its LGBTQI communities, and what positive steps there are still to make.

While the area surrounding of the parade has historically been decorated and bedazzled in celebration of the event, this year seems to have attracted more support than ever before. From liquor stores to banks, this weekend, Sydney will be seen through rainbow coloured glasses.

Liquor store BWS is celebrating pride with a rainbow banner across the shop front.

BWS general manager Guy Brent says: “I am a passionate believer in equality in our workplace and am committed to ensuring a welcoming and inclusive experience for our customers that reflect their local communities.”

As well as the signage, BWS has partnered with Pandora to create a BWS Pride Radio Station to be played in-store.

V Energy has created a campaign specifically in celebration of Mardi Gras. Titled 'The fabulous hit that improves you a bit', it sees out-of-home (OOH) billboard adorned with shimmering sequins. V has also launched an outdoor photobooth where passers-by can take instant-photos of themselves with Mardi Gras themed filters.

V Energy Drink gets its sparkle on

ANZ revamps for the annual 'GayTMs'. Last year the Oxford Street branch of the bank transformed the inside and out into a gaudy, lavish, 1980's themed hotel lobby. This year the ATMs were decorated in accordance with the brand's current equality campaign, 'Hold Tight'.

The campaign encourages LGBTQI couples to be comfortable holding hands with their partner in public.

Medibank is heavily involved in Mardi Gras this year, with its own float featuring an interactive 'Kiss Cam'. The float channels Medibank's recent #BetterWithAKiss campaign which celebrates 'a kiss as a universal symbol of love – something that transcends gender, age, and sexual orientation'," Medibank general manager Fiona Le Brocq says.

Australian rum brand Bundaberg has also showed its support of pride in its recent campaign 'Unmistakably Ours'. The campaign features a short scene at the Mardi Gras as well as more broadly championing love and equality throughout the TVCs.

Qantas is flying the rainbow flag:

Our #RainbowRoo is ready to fly. ✈🌈 Supporting @sydneymardigras and celebrating love in all its colours. #MardiGras17 pic.twitter.com/k87gvg5btH

Golden Gaytime has a mock up of a rainbow ice-cream to celebrate the festivities:

ARN was announced as a sponsor, with its partnership to include Kiis 1065 activations and integrations across the festival, including live content from the parade broadcast on Kiis.

"Kiis 1065 is made for Sydney listeners and we are thrilled to be partnering with such an iconic Sydney event that is one of the world’s great celebrations, bringing our city together to celebrate diversity and equality with people from across Australia and the world,” he says.

Google is supporting the SGLMG Community Parade Grants Program by providing grants to individuals, community groups and not-for-profit groups to help lift their parade entries to a new artistic level. Grants of between $1,000 and $5,000 will be awarded to the applicants who demonstrate a clear message, relevance to the LGBTQI community and a high level of artistic merit.

SGLMG CEO Terese Casu says: "We're thrilled to continue our partnership with Google, who this year are increasing their support by helping community organisations to profile their message in the Mardi Gras Parade. The SGLMG Community Parade Grants Program has now grown through this support and will make Mardi Gras bigger and better than ever."