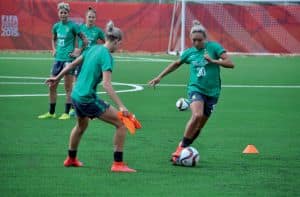 At times, it seems as though the conversation around why women’s sport doesn’t get more investment is a sport in itself.

Take The Matildas. They have made it further than any previous Australian men’s or women’s soccer team, but for all the fanfare, women’s sport in Australia remains a “poor cousin” to men’s when it comes to sponsorship and broadcast coverage – a sign that brands and broadcasters are consistently undervaluing the opportunites.

The figures are not inspiring. A report produced last year for the Australian Sports Commission by Repucom, a global sports intelligence agency, pegged dedicated broadcast coverage for women’s sport in Australia at 7% of the total – the same as in 2008. Print inches, meanwhile, slumped to 6%.

Among the major broadcasters, ABC came out on top, dedicating 20 % of coverage to women’s sport, followed by Seven Network and Channel Ten, at 12%. ABC’s dominance in this respect is likely to have since suffered, given its decision late last year to axe the Women’s National Basketball League (WNBL) and the women’s soccer W-League in the face of funding cuts.

Sponsorship levels are hard to pin down, as brands and sports organisations are reluctant to share figures, but Guy Port, managing director of Repucom, pegs it at around 7%. Simon Rines, founder of International Marketing Reports (IMR), a UK-based sponsorship research specialist, tells AdNews he estimates Australian women’s sports attract “well below 20%” of the pie that is primarily gobbled up by a small selection of men’s sports, with Aussie Rules and Rugby League at the top of the pile. In 2013, IMR estimated the sponsorship market overall to be worth around $735 million at that time. Either way, poor cousin it is.

Rob Smith, managing director of Chime Sport & Entertainment, suggests netball and soccer are the “best funded and most visible” of the women’s sports. “But they’re far from cash cows,” he adds.

Netball, IMR claims in its report, attracted just 0.5% of the total sponsorship pie in terms of value, in deals worth $3.38 million in 2013, it estimates. Soccer gained 10.1% of the pie, but this includes men’s teams too. While the Matildas partner with big names like Westfield, NAB, Nike, Qantas, Hyundai and Telstra, national hockey team the Hockeyroos waited 12 years after their gold medal success at the Sydney Olympics to pick up their first major sponsor, mining and energy services firm Ausdrill.

Watching you, watching me

But there is a change underway. Between 2008 and 2014, women became the majority of the audience for women’s sports. And there were growing trends, including a rise in girls participating in sport in school and a push by sports organisations to bring more women into the fold.

Roy Morgan research released last October shows that across 10 categories of sporting activities, women’s participation was up by between 2% and 8% from 2010 to 2014 – something that makes women far more likely to become fans and display “fan behaviour” towards associated brands. This is particularly relevant given that women overwhelmingly make major consumption decisions, according to Bec Brideson, founder of marketing to women agency Venus Communications. As Rob Smith points out, “Women represent more of a growth market than India and China combined.” With women’s sport finding its way onto live streaming and on-demand platforms, and more eyes on this social and demand-driven content, there’s an opportunity for more targeted advertising, the impact of which could help offset lower viewing figures.

“With the ability for partners to have a one-on-one conversation or a very intimate and direct conversation through social channels, there’ll be some leaders and some really interesting things to come out of sponsorship in that space,” says Marne Fechner, former commercial manager for Netball Australia and CEO of the Netball World Cup 2015.

The idea that only women watch women’s sports is “one of the biggest myths” surrounding women’s sports, according to Port. In 2014, men made up 49% of viewers and watched slightly more minutes per week than women, he said. Men also rated it more highly in their entertainment priorities, suggesting brands shouldn’t exclude men as a target audience when considering involvement with women’s sports.

While there is an appetite for change among some media outlets and brands, women’s sports are still rooted in traditional, sexist views. One sports commentator AdNews spoke with suggested that older, male senior executives will continue to make old-fashioned decisions when it comes to women’s sport. “Not nice, but it’s the truth,” he opined, on condition of anonymity.

But ask those in the know in sports and femalefocused marketing, and they’ll tell you these developments mean something. Port points to such trends as a sign that women’s sport has been “persistently undervalued” by brands, while Smith says that growing fan bases and the move away from free-to-air as the holy grail of sports coverage towards digital and social media will open doors for women’s sports and the brands that work with them. “It’s changing the value proposition,” he says.

There’s also the fact that women themselves are hungry for something different, says Brideson.

Tired of worn-out, intellectually “insulting” marketing campaigns – “old rockers crooning about low prices” – creative tie-ups between brands and women’s sport could be just the thing to get them to “sit up and spend”, she says.

Increasingly, brands needn’t rely on TV coverage. Under Armour’s ‘I Will What I Want’ campaign is a case in point. The video featuring ballerina Misty Copeland has gained nine million YouTube views to date and is driving outstanding revenue increases for the US sportswear brand.

Ian Laing, general manager of the Australian Paralympic Committee (APC) knows a bit about the challenges of getting companies to move outside their comfort zone to sponsor non-traditional sports. He tells AdNews that despite a dearth of coverage, aligning with women’s sports could reap dividends for brands if they take a more nuanced look at their objectives. Among those doing so are Commonwealth Bank, a major sponsor of women’s cricket, and, on the smaller end of the scale, Roxsolt, an “artisan” consulting company in Melbourne that sponsors a women’s cycling team. Both companies point to how sponsorship of the teams allows them to demonstrate their commitment to “diversity and inclusion”.

Roxsolt is also open about the fact the partnership represents great bang for their buck, something Smith says more brands should bear in mind when considering their sponsorship options.

Sports codes doing it for themselves

Some sports codes are taking matters into their own hands in the battle for coverage and investment. Netball Australia is widely considered to be a trailblazer among women’s sports organisations, having successfully adjusted its competitive offerings and organisational structure to boost sponsor engagement in a major way, bringing in ANZ and Telstra, among others.

Fechner says it was all about being “responsive and adaptable to the needs of partners that you want to invest in your sport”. Most recently, in what Fairfax Media termed a “groundbreaking deal” with Ten in February, Netball Australia turned the structure of a sports rights deal on its head to ensure its games are televised. The arrangement sees its sponsors pay Ten to broadcast matches on its free-to-air channel One.

It’s a massive vote of confidence for the sport by its brand partners, and a strategy that will be watched closely by other sports organisations and sponsors. In another vote of confidence – this time for women’s soccer – this week EA Sports revealed that US women’s soccer star Alex Morgan will grace the cover of its latest FIFA video game. The Australian version will feature Matildas defender Steph Catley. The record-breaking audience for the FIFA Women’s World Cup this year – women viewers in the US were up 91% and the final was the most watched soccer game in US history – points to the potential inherent in this “if you build it, they will come” approach.

The Cup represented a watershed moment for women’s sports, a major missed opportunity for brands who didn’t sponsor, and a massive windfall for those who took the leap of faith to do so.

Even Snapchat, which has vowed to bring more sports to mobile, failed to secure a sponsor for its Women’s World Cup Story. Cricket Australia is also making waves with the introduction of its four-year National Female Cricket Strategy that coincided with a 39% rise in women playing the sport last year. Giving pay increases to female cricketers and introducing eight women’s teams to the Big Bash League this year – airing on Ten and One – the organisation is forging full steam ahead with a female-centric strategy that shouldn’t go unnoticed. For brands looking to reach a female audience, cricket should present an ever more appealing proposition.

This feature is a part of the special report into sports marketing from the latest issue of AdNews Magazine (24 July). You can get the full-picture here, either instantly on your iPad or in print.