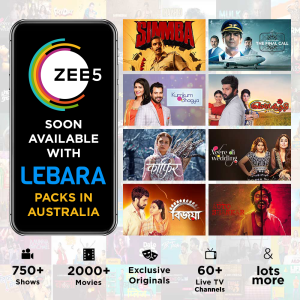 Digital entertainment platform ZEE5 announced a partnership with Lebara Australia to bring the largest library of entertainment content for South Asians to Lebara customers down under.

ZEE5 is the fastest-growing over-the-top (OTT) platform in India with 17 different languages and 100,000 hours of content available to subscribers.

Lebara Australia customers will be able to get a six-month ZEE5 subscription bundled with select prepaid plans from September.

“Australia is an extremely important market for us as we expand across the globe and we’re extremely excited to announce our very first partnership with local telecom operator, Lebara Australia," Anand says.

“With this partnership, we’re looking to increase our presence in Australia using Lebara Australia’s subscriber base which will now have access to the best of Indian entertainment on any device of their choice."

Ash Saini, general manager, Lebara Australia, says the partnership will offer a large libary of content for its users.

“With a huge appetite for Indian entertainment amongst our ethnic market, we are very excited to launch our bundles with ZEE5 subscriptions and we aim to ensure that every individual on the go uses ZEE5 as a one stop destination to consume the best of Indian entertainment,” Saini says.

ZEE5 is the latest streaming platform to announce it would enter the Australian market.

Disney is also set to launch its streaming service Disney+ into Australia, with a local launch date of 19 November. The company is also going on a hiring run for its Melbourne office and appointed a new head of streaming, Sally O'Donoghue.