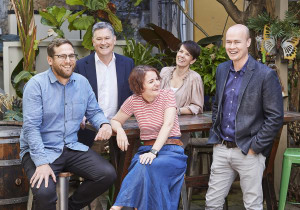 It was announced in October last year that Cam Blackley would be exiting the business after nearly four years to join M&C Saatchi.

Derwin joined BMF from Clemenger Melbourne in 2015 and has led the Aldi creative account for the last three years.

With 20 years experience in the UK, the US and Australia, Derwin has an international work career spanning across clients such as Nike, Nestlé, Oak Milk, Toyota, The Star, St Vincent de Paul and The Observer newspaper.

BMF has been undergone a three month recruitment process to fill the Blackley-sized hole in the agency. MD Steve McArdle says he's delighted to be able to recognise the agency's own talent and promote from within.

“Alex has been the creative director behind a huge amount of the BMF work that’s dominated the effectiveness awards and been creatively celebrated over the last three years," he says.

After nearly a decade as one of Australia’s best agencies, BMF seemed to have lost its way in its teenage years. But, the agency marked its 21st birthday by taking out Effective Agency of the Year at the 2017 Effies.

AdNews sat down with McCardle and Christina Aventi a day before Blackley internally announced his departure to discuss BMF's return to the top. Read more here.

Did you see BMF's new back to school ads for Aldi this week?