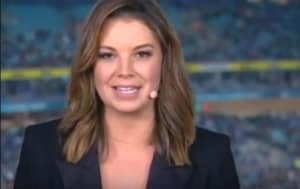 Host Yvonne Sampson was a star of Nine's record-breaking State of Origin broadcast.

State of Origin game one has pulled in the highest metro audience in the competition's history with 2.7 million viewers tuning in, surpassing all expectations of host broadcaster Nine.

"It's fair to say it surpassed our expectations, especially with the match being such a dour affair and such a struggle," he says.

"It just goes to show State of Origin is the pinnacle of sport in Australia and it keeps delivering year in and year out, not only the players on the field, but in terms of the interest in people coming to it. It's not just a sporting contest, but event television."

State of Origin games are among the highest rating broadcasts in the country. By city, 1.2 million tund into the game in Sydney, 813,000 in Brisbane and 496,000 in Melbourne.

Last year's game one attracted a metro audience of 2.46 million. While this year was the strongest metro audience, it fell short of the record national audience (including regional figures) of 4.19 million for the third game in 2013 - higher than last night's 3.95 million.

In a low-scoring affair dominated by defence, Queensland toughed out a 6-4 victory after a Dane Gagai try cancelled out Boyd Cordner's ealier touchdown. In the end, an early Jonathan Thurston penalty proved to be the difference.

The game was the first hosted Sampson, who did an outstanding job in the hot seat flanked by footy royalty.

"it's the first time in Australia that a woman has hosted a major sporting telecast of that size and she did a terrific job. Yvonne was chosen on merit, the fact she's a woman is secondary," Malone says.

"She's a terrific broadcaster, she's comfortable, relaxed and has that rare quality where she is a comfortable person to watch on TV, and that's not something everyone has."

As Queensland have taken a vital away win, Nine chiefs will be sweating on how NSW fans (and the team) react in game two. Anything but a Blues win could extinguish interest in game three.

Malone believes game one was close enough to keep interest in the contest alive.

"In TV land we'd like to go to a decider back in Sydney, but the players will determine that. I think the Blues showed enough yesterday to keep Blues fans and the country interested, it was such a close match and I'd be expecting another close on in three weeks time in Brisbane."

While the game itself was a tight, and at times a dour affair, it will also be remembered by Maroon forward Sam Thaiday's post-game clanger, which left Brad Fitler speechless.

When asked a seemingly innocuous question about the win, Thaiday described it as: “A bit like losing your virginity — it wasn’t nice but we got the job done”. Freddy's reaction is priceless and can be seen below.

The quip drew the ire of social media armchair warriors and the parochial Sydney tabloid The Daily Telegraph, which ran it on their front page, probably with little else to crow about from the game itself.

Aside from that late slip, the evening was broadly positive for Nine and sports broadcasting.