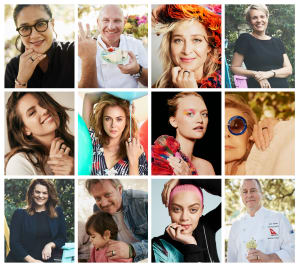 ‘Until We All Belong’ calls on Australians to show their acceptance of marriage equality and commit to wearing a bespoke ring until same-sex marriage is recognised in Australia.

So far, nearly 50,000 rings have been sold through Airbnb’s eBay site.

To show its support, Marie Claire dedicated a spread in its June magazine to the cause, featuring celebrities, including chef Kylie Kwong, designer Carla Zampatti and The Project host Waleed Aly wearing the ring.

The feature will appear in the June issue of Marie Claire

“Airbnb has managed to deliver the most public corporate declaration for marriage equality in Australia’s history, and Marie Claire’s now brought the star power with celebrities agreeing to support the campaign. Their involvement will help amplify the message and that’s what it’s all about – getting mass support to help drive positive change,” Marie Claire editor Nicky Briger says.

“Marie Claire has championed many causes over the past 22 years, and marriage equality is an issue especially close to our hearts. In 2012, Marie Claire launched our “I Do” campaign, yet fast-forward five years and we’re still having the same conversation. It’s embarrassing, unprogressive and, more importantly, an infringement of basic human rights.”

The campaign launched with the backing of some of Australia’s biggest brands, including Qantas, Google, ANZ and eBay.

It marks the first time Airbnb has worked with Clemenger BBDO Melbourne.

“The Until We All Belong campaign is the most public corporate declaration for marriage equality in our nation’s history and is an opportunity for all Australians to show their acceptance of marriage equality and pledge their support for a friend, family member or loved one," Airbnb ANZ country manager Sam McDonagh says.

"We are proud to join partners such as Marie Claire for the Until We All Belong campaign."

Earlier this year, Marie Claire teamed up with creative agencies to take a stand against the gender pay gap in a series of mock briefs. See them here.